Why is TRON growing?

Despite the abundance of negativity related to Tron lately, the project has a significant advantage — it has the availability of the finished product, while many projects that launch ICO on a daily basis...

Despite the abundance of negativity related to Tron lately, the project has a significant advantage — it has the availability of the finished product, while many projects that launch ICO on a daily basis...

Despite the abundance of negativity related to Tron lately, the project has a significant advantage — it has the availability of the finished product, while many projects that launch ICO on a daily basis rarely have an MVP and are unlikely to provide their own blockchain.

Over the past week, Tron has grown by 20%. The reason behind this rise is TVM launch in the nearest future — Tron virtual machine. 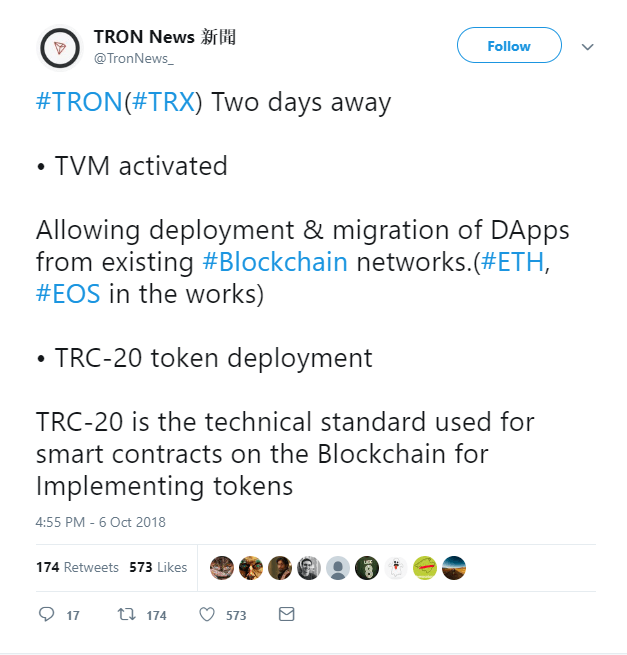 After launch, the DApps (decentralized applications) could be transferred from the Ethereum blockchain and EOS to the Tron blockchain. Also, TRC-20 standard tokens will be launched (the same way as the ERC-20 tokens in the Ethereum network).

How does TVM work?

The TVM virtual machine offers developers ability to connect already existing developments to their blockchain. TVM is compatible with Ethereum, so developers can freely switch from ETH to Tron. Moreover, you do not need to learn a new programming language for that. TVM also reduces the time it takes to develop a smart-contract: developers can specify any conditions for it’s execution. The TVM virtual machine supports the DPOS (distributed proof of stake) consensus algorithm.

Tron’s blockchain is less prone to overloads: if an application exceeds the bandwidth limit, it is automatically transferred outside the main network, thereby reducing the load on it. TVM has a lighter architecture, which also helps save the resources.

Another factor in the TRON token growth was the news piece from the Bitfinex about adding fiat pairs to the TRON token. Now the clients of the exchange have the opportunity to trade in tokens in pairs with the Japanese Yen, the Euro and the British Pound. 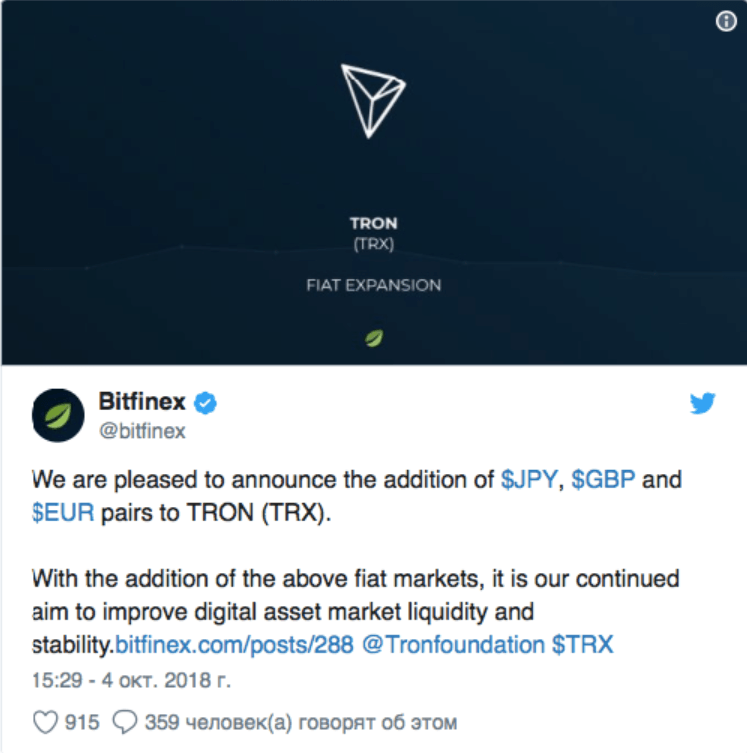 The joy for pirates? BitTorrent will reward in Tron tokens for active files distribution.

Tron integration with BitTorrent is indicated in the Tron roadmap. Tron CEO Justin Sun positions this innovation as a revolution in content distribution. He hopes that this will help to motivate the creators of unique content and relieve the process of disseminating information from unnecessary intermediaries.

By the way, there is no information if any Ethereum applications switched to the Tron blockchain so far. Users accuse Tron of excessive craving for PR and shows instead of focusing on development.

Of course, while the market is in a deep flat, it’s hard to imagine what kind of news сan change the trend to an upward one. However, despite the criticism, Tron has a strong marketing team that doesn’t let the community discard the project.