We had not mistaken in the latest review: indeed, the outcome was close. Since the moment of previous review writing, the Bitcoin has made an attempt to break through the edges of the triangle upwards. On...

We had not mistaken in the latest review: indeed, the outcome was close. Since the moment of previous review writing, the Bitcoin has made an attempt to break through the edges of the triangle upwards. On...

We had not mistaken in the latest review: indeed, the outcome was close. Since the moment of previous review writing, the Bitcoin has made an attempt to break through the edges of the triangle upwards. On October 8, the price reached the level of $ 6,730, after which it was adjusted to the level of $ 6,660 and traded in the range of $ 6,660 - $ 6,680 with a repeated attempt to overcome $ 6,700 - without success though. This morning (10.10) we saw a sharp decline, completely blocking the growth of Monday. At the time of this writing, the price has reached the level of $ 6,550. We draw your attention to the fact that the touch upon triangle edge resulted in the BTC / USD price reduction. Our readers were ready for such a turn of events: we also wrote about the probability of the decline in the latest review. In any case, nothing critical happened and the price moves within the limits we have previously defined (read the last review).

According to the indicators on the hourly time frame, MACD is located in the trading area.  The sliding averages move higher than the prices and tend down.

On the 4-hour timeframe, the indicators also speak of a downward movement. If you followed the price movement nature last week, the price reached a minimum on the way to the level of $ 6,500, overcoming of which is likely to open the way to $ 6,400 - $ 6,340.

On the daily timeframe, we see that the price is very close to the borders formed by the triangle and, of course, the volatility has increased.

The MACD indicator tends to enter the trading area while sliding averages pass higher than the prices and are in a neutral position.

A historically significant event for the crypto industries at large took place in Switzerland - the Crypto Finance Group received the first ever cryptocurrency management license from the Swiss Financial Market Supervision Authority (FINMA). The company will be able to provide services to institutional clients for investing in cryptocurrency entirely legally. This event will reduce the gap between the traditional and cryptocurrency markets. It is expected that a number of Swiss cryptocurrency companies will soon obtain such licenses.

Meanwhile, some news from the largest cryptocurrency exchange Binance: it's representatives announced the listing rules changes. All the fees for tokens listing will be sent to charity initiatives.  However, what exactly these initiatives will be about is not specified at the moment. Besides, the teams themselves will offer the amount they can pay for the listing, and the exchange will not dictate its rules - this is probably because the stock exchange has been criticized repeatedly for non-transparent listing rules. 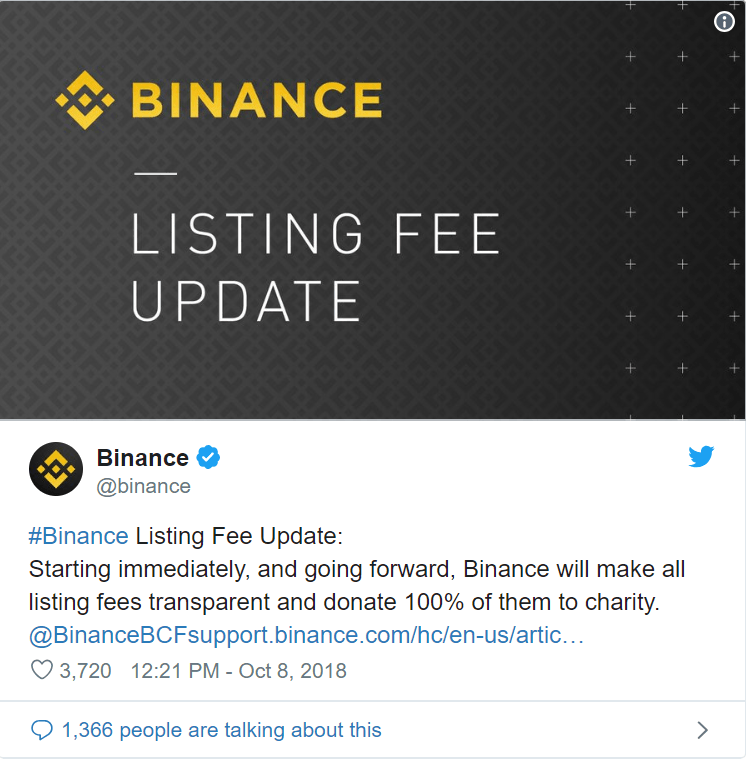 Also, Binance announced the delisting of some tokens: Bytecoin, Iconomi, ChatCoin and Triggers. All the pairs will be removed from the exchange on October 12, and throughout the month it will be possible to withdraw tokens from the exchange. Among the selection criteria for tokens listing, Binance names such as team activity, developer level, network stability and smart-contracts, project social activity, fraud cases. Which criteria the mentioned cryptocurrencies failed to fit, is not specified, however. After the announcement, these cryptocurrencies sharply lost in price - Bytecoin and 17%, Iconomi - by 8%, ChatCoin - by 20%, Triggers - by more than 37%.

What are your actions for today?

Our readers were notified about the likely decline since the latest review, we also wrote about the market behaviour against on the background of positive news, which means this morning was not a surprise for our readers and us. We still have open positions to buy BTC, and the current decline provides quite an excellent opportunity to open it to those who did not have time or did not read our past recommendations. Do not also forget to put stops below the support levels.

Trade wisely, read HiTecher and your profit income will not take long!!!