The BTC rate analysis. Everything according to the plan: our predicted market decline took place

On the night of October 10-11, the Bitcoin rate dropped sharply by $ 240, to $ 6,330, after which it continued to decline. At the time of this writing, the BTC is trading at $ 6,292. We warned about such a decrease. By the way, thanks to this reduction, part of the purchase orders has worked out.

Take a look at the charts.

On the hourly timeframe, you can clearly see how the price went down again from the top of the triangle with a powerful impulse after touching the triangle border and went down in two candles to $ 6,250, where it met with robust support. Last day the price was trading in a narrow range of $ 6,220 — $ 6,330. The MACD indicator in the trading area, the slow moving average (MA50) passes above the price and tends to fall, keeping the bearish mood. The fast moving average (MA9) at the time of this article’s writing is below the price and turns up, which may indicate an upward movement attempt, but it is too early to conclude, especially on the hourly timeframe. 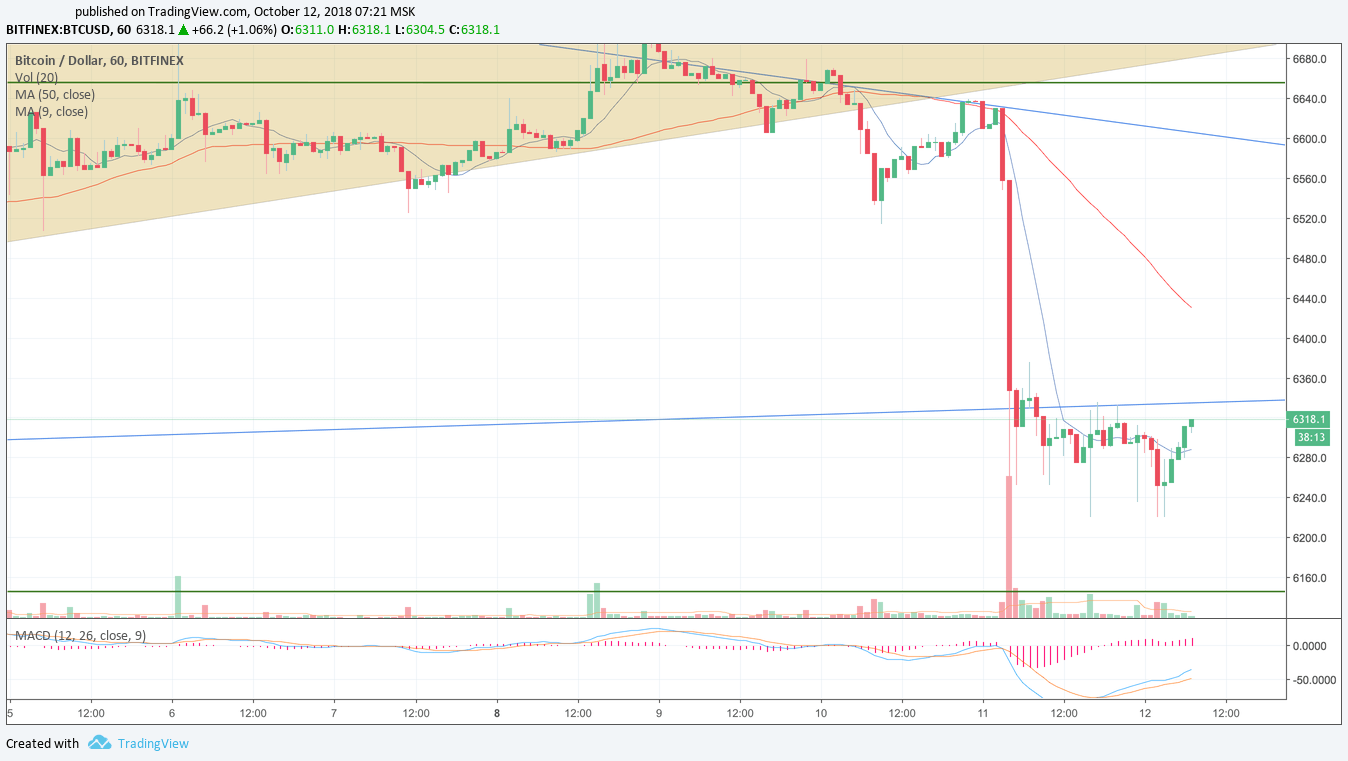 We do see strong support on the 4-hour timeframe, which kept the decline yesterday and on September 17th. The trade goes under the bottom edge of the global triangle. MACD indicator is in the sale area. Moving averages MA9 and MA50 are higher than the prices and tend down, everything speaks of a bearish market. Ongoing support holds back the decline to the more significant level of $ 6,150, which is present on our charts for a long time and, if the bears push it, then we can see the testing of annual lows. However, such a scenario is still unlikely. 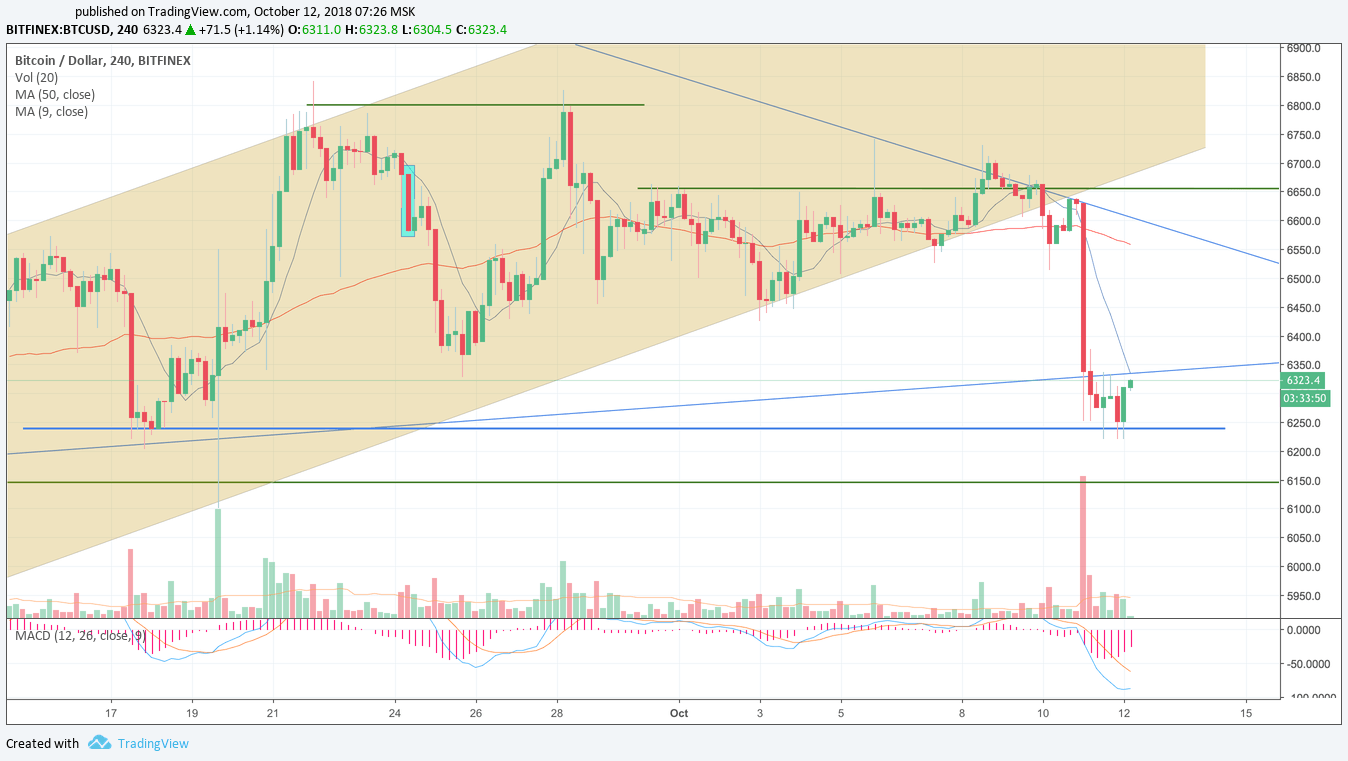 The overall picture is very clearly visible on the daily timeframe. Price clearly went down from the edge of the triangle. The MACD indicator is at the neutral area, but already shows a transition to the trading area. Moving averages pass higher than the prices, and fast MA9 passes under the slow MA50, which indicates a further decline. 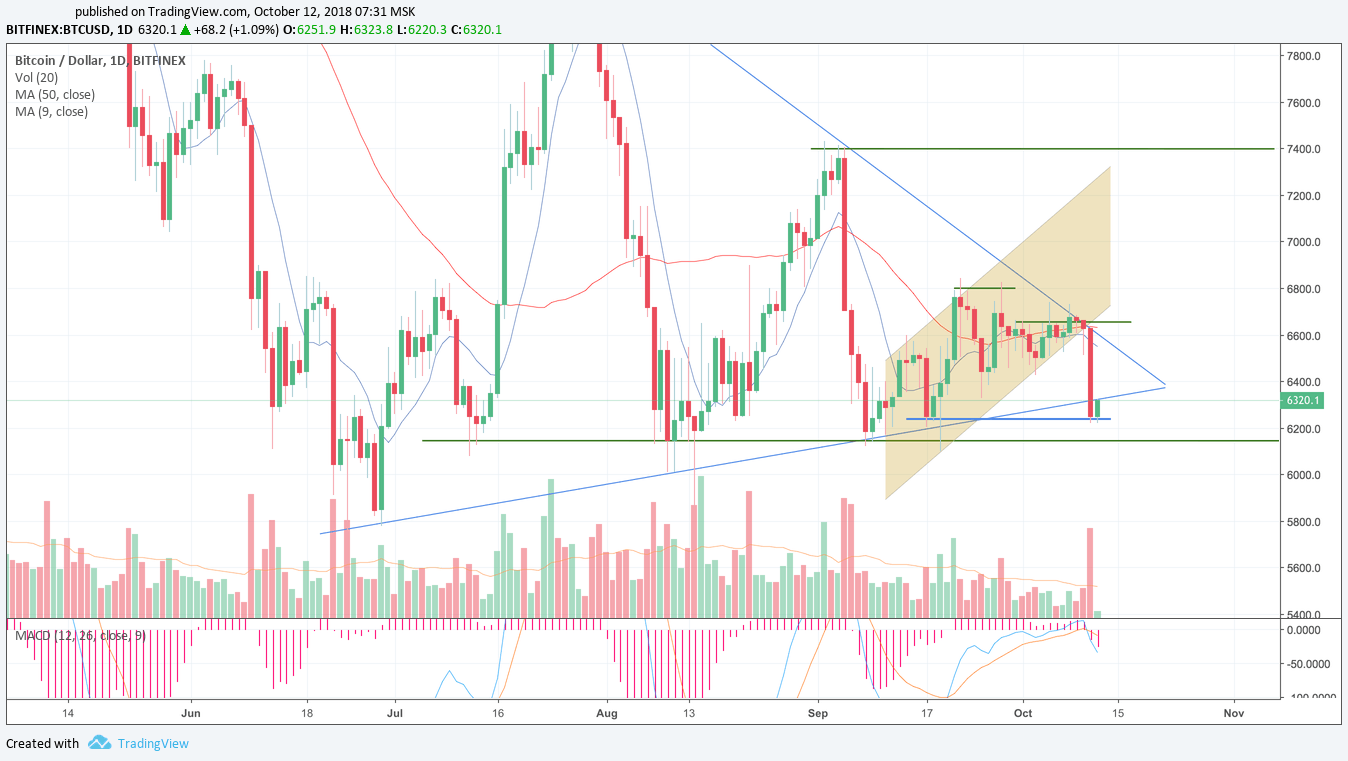 It is noteworthy that the sharp decrease coincided with a general decline in the stock market. The reason for the stock market fall is that the Federal Reserve has made a statement of intent to bring the key rate to a certain standard. This is how the markets closed on October 10th. 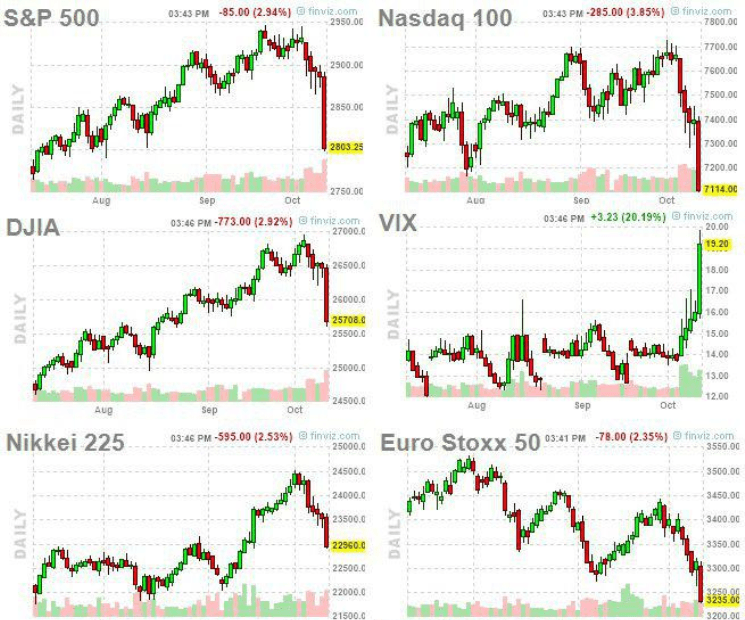 Another reason for the market fall is the World Economic Outlook report published by the IMF, which called cryptocurrency a threat to the traditional financial system. However, in the list of threats, the authors put the cryptocurrencies in the last place. The reasons for concern are classic and already known: volatility, rising popularity, lack of oversight. Moreover, the report states that cryptocurrencies represent danger only in the case that their rapid growth continues. Therefore, there is no particular cause for concern. By the way, in the April 2018 report, the IMF did not find in the cryptocurrency distribution threats to financial stability.

Markets react in much the same way as a month ago when Goldman Sachs responded to a statement that it abandoned plans for investing in Bitcoin-based tools, which ultimately turned out to be a distortion of reality.

Another likely reason is the temporary suspension of the fiat deposits on the Bitfinex exchange. The exchange does not explain the reasons behind the decision but promises to get the work back to usual mode in the nearest future. 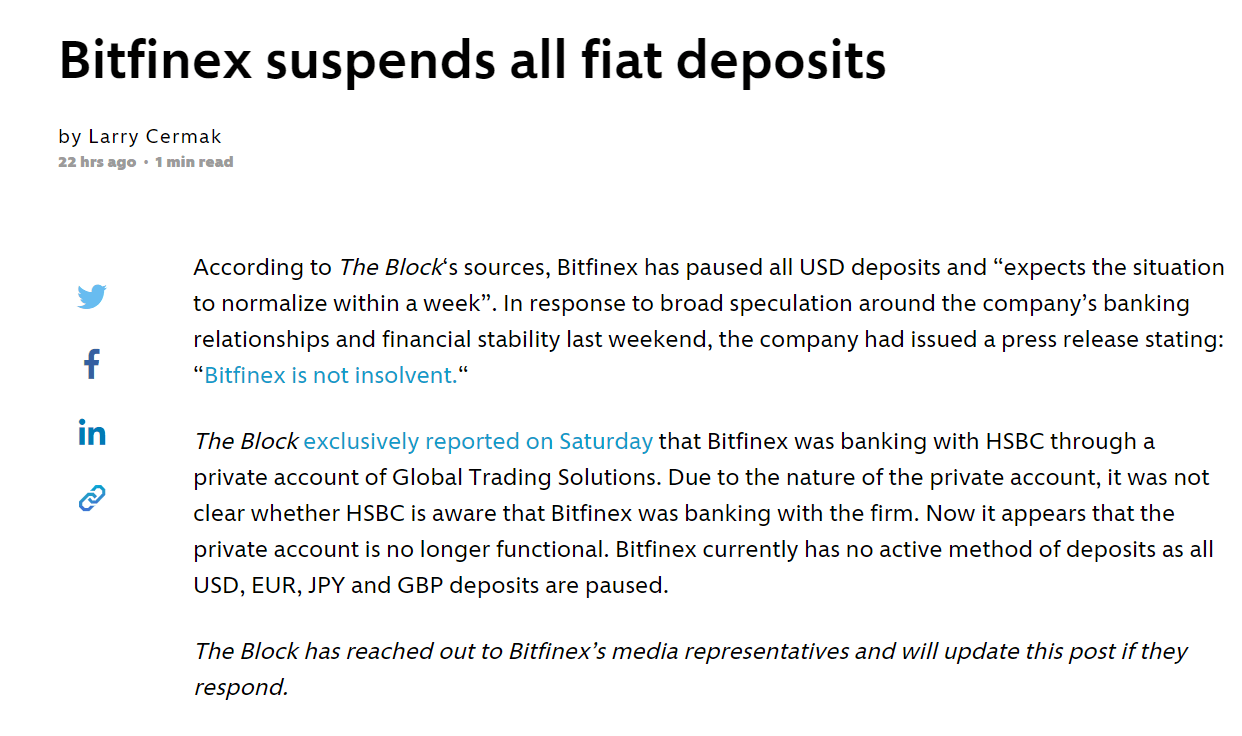 Market participants believe that the exchange could face the problems since HBSC bank blocked the private account which the exchange used to run the operations. Rumours of the possible insolvency of the stock exchange occurred last week but were refuted by the exchange — they said that at the moment there are some problems, but they are working to make fiat operations more comfortable.

The combination of such news may work as a lit match in a gasoline warehouse. However, thanks to technical analysis, we were ready for the price reduction and, perhaps, if the market did not fall, the price would not have dropped so low. At present, everything is happening within our forecasts, our positions for buying are still open, and some of them are new — which were opened yesterday on a decline on pending orders.

Read our predictions, and no market turmoil will take you by surprise! We wish you profit and have a good weekend!