On the daily timeframe, the BTC price continues moving in a contracting triangle pattern with its lower boundary being at this year’s minimum of $5,755. In the near future, the trading is likely to be limited...

On the daily timeframe, the BTC price continues moving in a contracting triangle pattern with its lower boundary being at this year’s minimum of $5,755. In the near future, the trading is likely to be limited...

On the daily timeframe, the BTC price continues moving in a contracting triangle pattern with its lower boundary being at this year’s minimum of $5,755. In the near future, the trading is likely to be limited by this triangle.

The first support line is at the $6,150 level which has been holding back the decline since September 8. In the event of a decrease, the next support level will be the $6,000 psychological level followed by the last year’s minimum of $5,755.

As of this writing, the price is under a fast moving average (MA9) which, in turn, stopped decreasing from September 5 onwards and is now in the neutral position.

On the 4-hour timeframe, the BTC price broke through the ascending channel and came down to the $6,200 level on September 17, but corrected quickly. At the moment, several candles are showing minimum volatility under $100 within the $6,295$ - $6379 range, where it is currently being traded. As we see from the chart, from September 17, the price has been also squeezed by a triangle. The local resistance level is $6,380.

On the 1-hour timeframe, the price came close to the trendline (marked green) being above the fast and slow moving averages (MA9 and MA50). The fast moving average crossed the slow one giving a signal to buy.  But we cannot talk about a sharp impulse without large volumes. 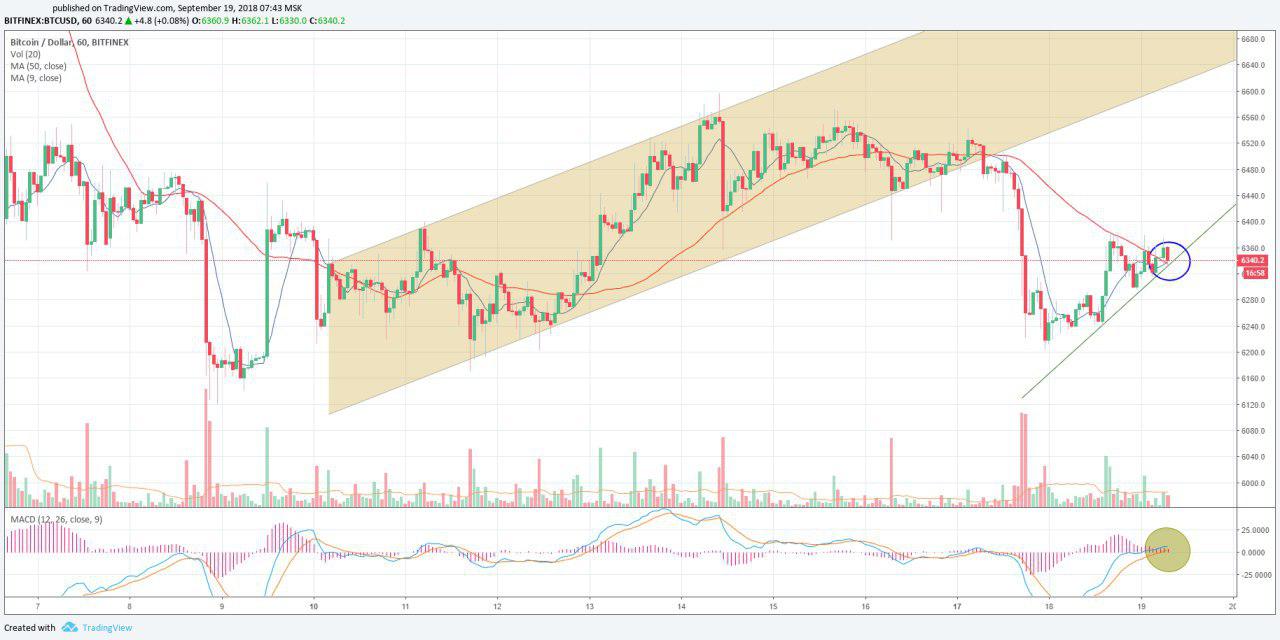 The market is still waiting for institutional investors to come…

Last week’s market overview (10-17.09) is available here. We wrote that the cryptocurrency market is desperately in need of big money which still has a hard time entering the market. In the last six months we have seen many companies taking steps to integrate cryptocurrencies and Fiat, but ready-made solutions are still few and far between and they are not reliable enough for major players. It was reported on Monday, 17.09,  that Binance, the largest exchange, would on Tuesday launch a closed beta testing of a new trading platform with support for Fiat in Singapore. Also on Tuesday, Nasdaq, the world’s second largest stock exchange, announced that it was working to acquire Cinnober, a Swedish trading solutions supplier. Cinnober has a positive experience with digital assets and making it easier for institutional investors to invest in them.

From a technical viewpoint, the picture has not changed since our last review. The first important level in the upwards movement is still $6,600. Capitalization has declined and, as of this writing, amounts to $199,631,093,539. What is important now is to monitor the market. The flat pattern will most likely continue today. Our strategy remains the same: refrain from making unnecessary movements and do not trade amid the media hype. We can handle it pretty well, can’t we?