What Is Happening to the Cryptocurrency Market: Situation Review from

This morning, bitcoin price on Bitstamp plummeted all the way down to $4,300, on Bitfinex it dropped to $4,475. The main cryptocurrency’s drop indicator reached 78% of its historical maximum. We are not trying...

This morning, bitcoin price on Bitstamp plummeted all the way down to $4,300, on Bitfinex it dropped to $4,475. The main cryptocurrency’s drop indicator reached 78% of its historical maximum. We are not trying...

This morning, bitcoin price on Bitstamp plummeted all the way down to $4,300, on Bitfinex it dropped to $4,475. The main cryptocurrency’s drop indicator reached 78% of its historical maximum.

We are not trying to point fingers at anyone for the current decline — many of our fellow tradesmen do an «excellent job» of it. Just ask yourself «What benefit will I get out of it?» We would advise you against going deep in search for truth, as this information will not bring you any benefit anyway. In today’s review, we will try to explain the behavior of market participants. We discussed the probable causes of the market fall in our previous review.

There will be no classic market review today, instead, we will make an attempt to understand what has happened.

The price found support at the $4,400 level, wherefrom it made an attempt to correct upwards, but, as we in our editorial office expected, the correction proceeded with a further decrease. It was attributable in no small part to the behavior of the market players. The market was not ready for such a sharp decline, and it was pure psychology (the desire to preserve their own money) that many people sold their assets during the correction time. Why did it happen that way? When the price dropped to $4,400, more and more people wanted to sell their assets to save at least some of their money. What do you think, if a person gave way to emotions and was ready to sell everything at the $4,400 level, but then the price has suddenly corrected to $5,000, at which level would he sell? Certainly, at $5000, and the chart shows it very well.

There is no point reviewing smaller timeframes for our further analysis.

There is a good reason why the $4,400 level was chosen — it is the level of August and October last year, which now serves as a support line.

The market reversal upwards is possible, but you should not get your hopes up that it will happen today. At the moment, a flat is possible at current levels and it may end with a further decline down to the $4200 — $4000 levels. The current market situation perfectly demonstrates the «panic sell» concept and shows how emotions work. 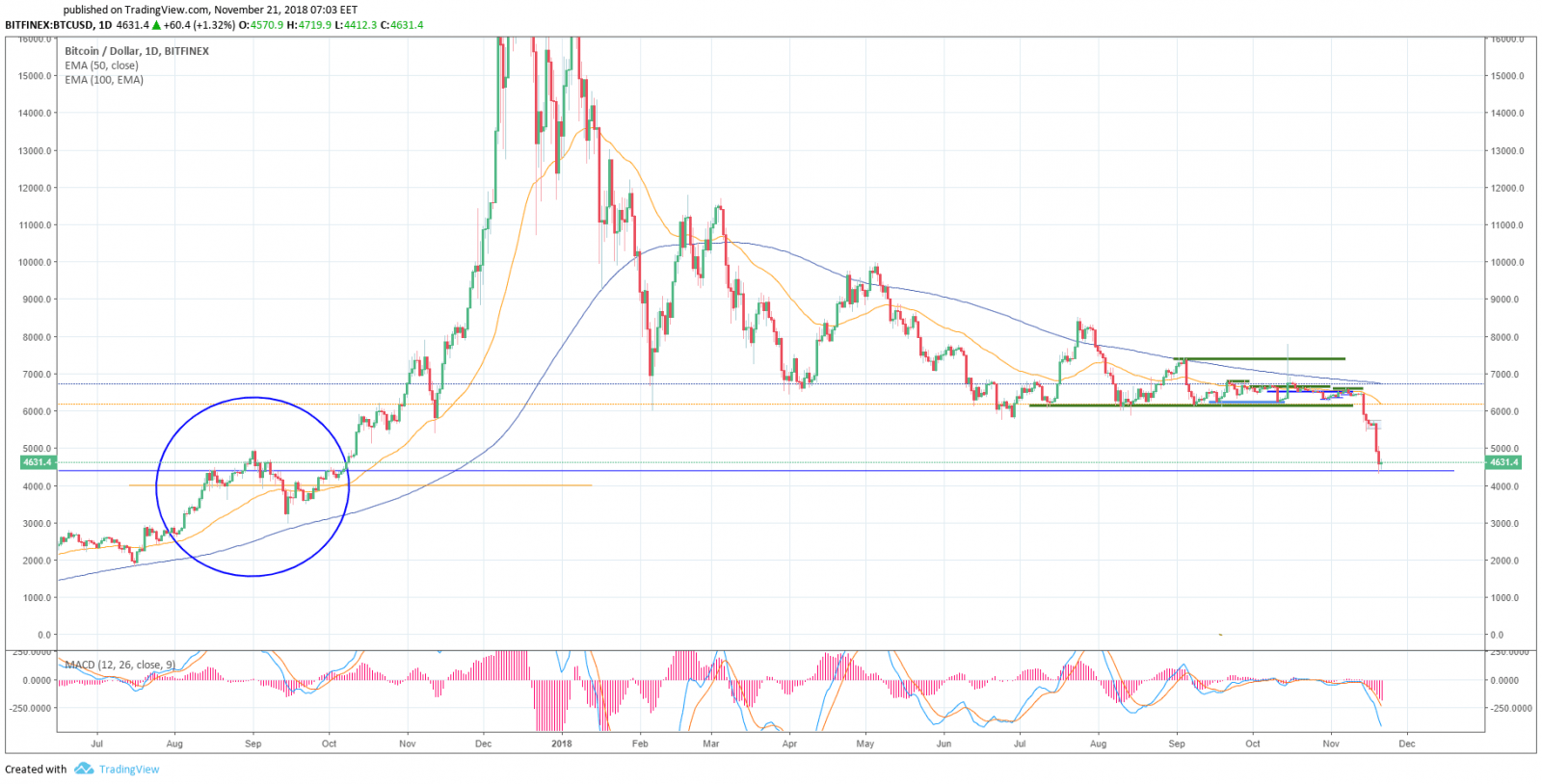 At the moment, we have a long position opened in case of a decrease to $5,000 (Bitfinex).

The market capitalization is rapidly deсreasing and, at the time of writing, totals $147,659,359,238. Cryptocurrency hash rates are falling along with the prices: Bitcoin has lost 12% of the hash rate historical maximum, and Ethereum has lost 25% of its August highs. Interestingly, Ripple has risen to the second position on Coinmarketcap: its losses are insignificant compared to other cryptocurrencies (it lost 10% during the last week). XRP outperformed Ethereum in capitalization by at $4 billion. CNBC’s Cryptotrader host Ran Neuner suggested that if the current situation remained unchanged, Ripple might come to the top as soon as this Friday.

Our recommendations: never trade when you feel you cannot control your emotions. Don’t look for market justifications, don’t waste your time trying to identify and expose «conspiracy theories» and don’t fall for advertisements featuring super traders who have predicted all that since the days of Maya Indians.

Read HiTecher and we will always share all important information about the market with you!