Why did the cryptocurrency market fall? Market overview on November 16

Stop the panic! No one expected such a deep fall, but panic is definitely not worth it. We have repeatedly talked about the risks of reducing to annual lows, but the decline was sharp and lower, updating the...

Stop the panic! No one expected such a deep fall, but panic is definitely not worth it. We have repeatedly talked about the risks of reducing to annual lows, but the decline was sharp and lower, updating the...

Stop the panic! No one expected such a deep fall, but panic is definitely not worth it. We have repeatedly talked about the risks of reducing to annual lows, but the decline was sharp and lower, updating the annual minimum. The capitalization of the cryptocurrency market on November 16 is $185 197 278 713, while the capitalization of Bitcoin fell below $100 billion — to $97 437 547 939.

Well, the initial panic has passed, now let’s look at the charts.

On the hourly time frame, we observe a correction after a decline to $ 5,432 (the new low of this year). The blue line on the chart (level of 5,400 $) — the price on November 12 of the last year, which currently acts as support, the decline to this level was the goal of technical analysis, in case of overcoming the low of 5,755 $ (the previous year’s low, recorded on June 14). It is likely to retest the level of $ 5,400, so do not rush to make a purchase. The Expected Fibo correction levels are clearly visible on the chart.
The moving averages are above the price. EMA50 at the level of 5,870 $ acts as a resistance. ЕМА50 crossed long ЕМА100 from the top down, that speaks about the downward movement. The MACD indicator is in the trade area. 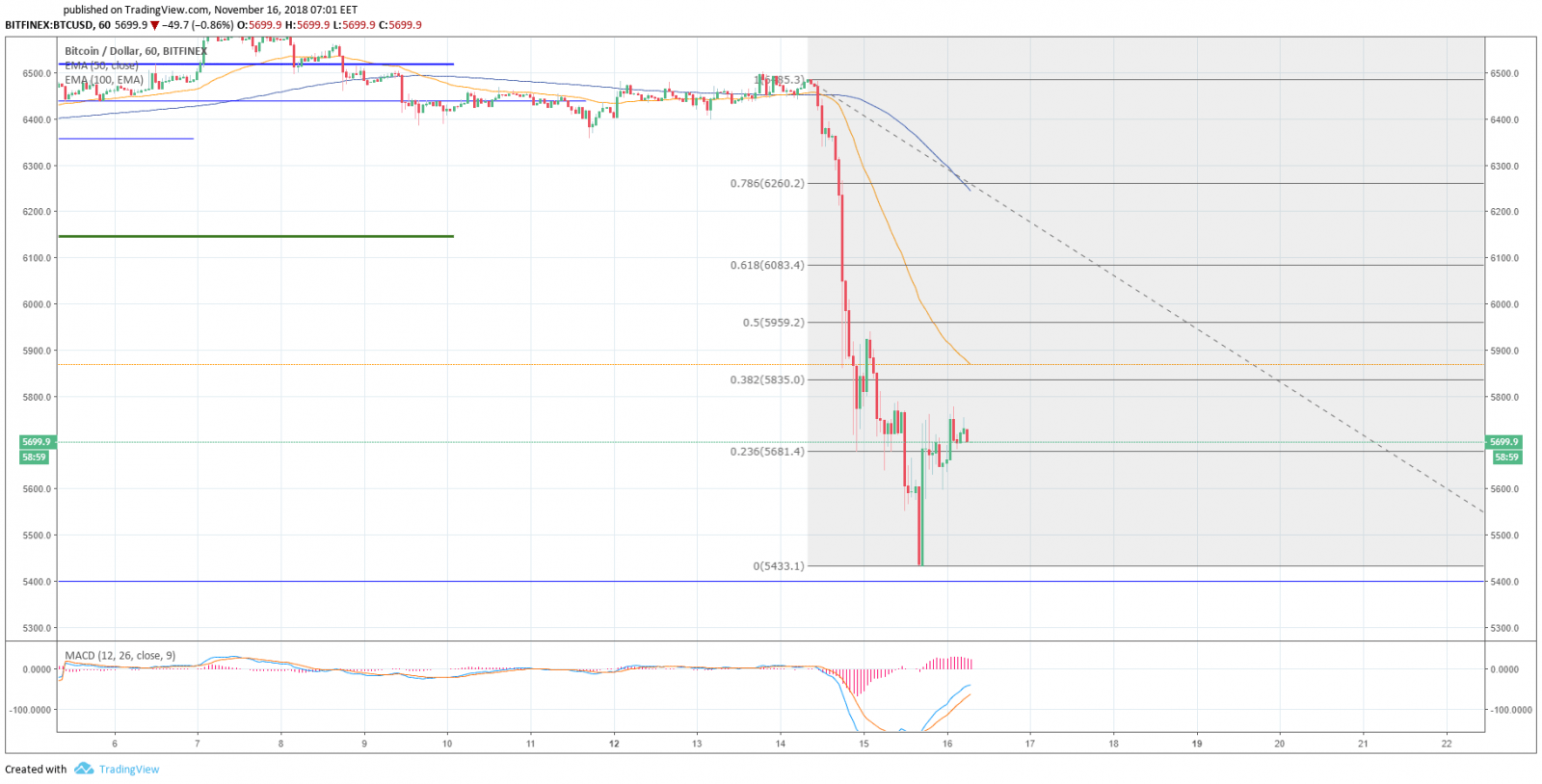 The level of 5,780$ is yet holding back at attempt to correct higher. Moving averages indicate the continuation of the downward movement. The MACD indicator is also in the sell area but has significantly unloaded after the decline on November 14 and 15.

If earlier, the level of 5,755$ acted as support, it would act as resistance for now. The price is under the moving averages ЕМА50 and ЕМА100, and the MACD indicator is in the sell area. The decline stopped, almost reaching the price level of November 12, 2017. It is quite possible that right with these levels the ascent of the main market coin can begin, but it’s too early to talk about it right now. We have done so repeatedly and with a profit. Therefore, we act according to our strategy, which has repeatedly brought us profit: taking a wait-and-see position. 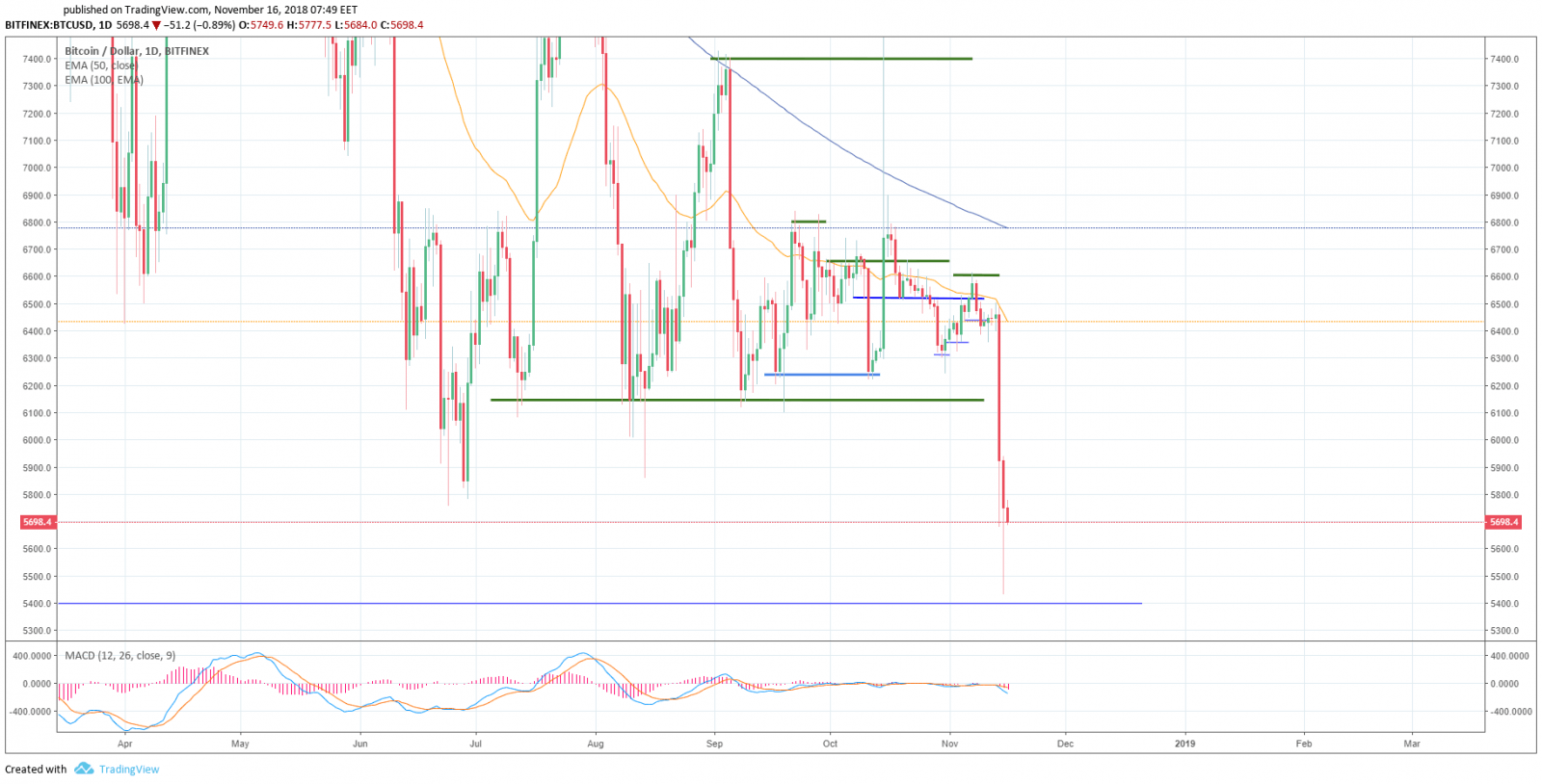 Such drops have a negative impact on the entire market, especially in an attempt to get it out of the gray zone to the white one — to the «big money.»

Why the cryptocurrency market fell: versions

On November 15, the Bitcoin reached its annual minimum — the price reached $ 5,560 on the Coinbase. The main question that worried everyone yesterday was «what happened?». So, let’s analyze the main versions.

Yesterday the BCH hard fork took place. Two versions were announced due to its run-up:

1. Bitcoin Cash ABC (BCHABC), advocated by Roger Ver. This is the basic, «original» Bitcoin Cash client. Under the leadership of Amaury Séchet, which is known for close (albeit unofficial) ties with a major manufacturer of mining equipment — the Bitmain, the Bitcoin ABC company has a policy of launching the next forks to update the BCH blockchain Protocol about every six months.

2. Bitcoin Cash SV (BCHSV) under the leadership of Craig Wright, who claims that he is behind the figure of Satoshi Nakamoto. After releasing a relatively new software implementation called «Bitcoin Satoshi’s Vision» — Bitcoin SV, Wright said he wanted to restore the Bitcoin to its original Protocol: version 0.1.0, launched back in 2009.

Craig Wright was more active and attracted more supporters to Bitcoin Cash SV. However, he decided not just to stop there. Rumor has it that some «whales» (holders of substantial amounts) sold a large number of Bitcoins the night before the fall to buy BCH just for the future BCHSV pump. This idea is confirmed by the recent Wright’s statement: «To all BTC miners...If you switch to mine BCH, we may need to fund this with BTC, if we do, we sell for USD and, well... we think BTC market has no room... it tanks.Think about it. We will sell A Lot! Consider that....And, have a nice day (BTC to 1000 does not phase me)».

To all BTC miners...

If you switch to mine BCH, we may need to fund this with BTC, if we do, we sell for USD and, well... we think BTC market has no room... it tanks.

Think about it. We will sell A Lot!

Consider that....
And, have a nice day

(BTC to 1000 does not phase me) pic.twitter.com/oUScEahtWc

The Bitmain mining pool sold all the BCH before the fork, and the Bitcoins raised were later sold to the market to recoup the drawdown. Bitmain had a lot of BCH, which they bought under the influence of Roger Ver. So, the sale of BCH was a kind of revenge to Roger Ver. If so, the revenge is a success: this night BCH fell much more than the most coins (-30%). Rumor has it that Bitmain may shift to the SV’s side.

There is a global redistribution of money in anticipation of future growth. Speaking in terms, this is a so-called «hamster squeezing » - forcing weaker players to transfer assets to the larger ones. All the «wars» — just a game show for the public’s sake and they are all arranged only with a single purpose to shift money into the right pockets.

Some adherents of conspiracy theories even admit that these big players may be the governments. I must say that there is some indirect evidence of this: recently, states have changed their rhetoric regarding the regulation — shifting from an unambiguous «ban» to a more loyal «to understand and develop the regulation.» The time only can tell whether this theory is true or not. So we recommend that you do not trade on emotions and follow our recommendations.