Users suspect Mi Mini PC to be a scam. Can Indiegogo projects be trusted?

In brief Mi Mini PC — is a pocket computer with a built-in 5″ display and the capacity of a conventional PC. The project launched on Indiegogo in May had a Stretch Goal of $20,000. With over $1.5Mn already...

In brief Mi Mini PC — is a pocket computer with a built-in 5″ display and the capacity of a conventional PC. The project launched on Indiegogo in May had a Stretch Goal of $20,000. With over $1.5Mn already...

Mi Mini PC — is a pocket computer with a built-in 5″ display and the capacity of a conventional PC.

The project launched on Indiegogo in May had a Stretch Goal of $20,000. With over $1.5Mn already collected, the gadgets promised parameters have been changed, the mass production and delivery deadlines have been pushed back, so the users are now in a rage.

We wrote the project’s brief overview in May where we mentioned the gadget’s key features and its estimated price. Back then, $750, 000 was already collected at the announced flexible goal of $20, 000.

Over $1.5Mn is already collected and money continues to come. 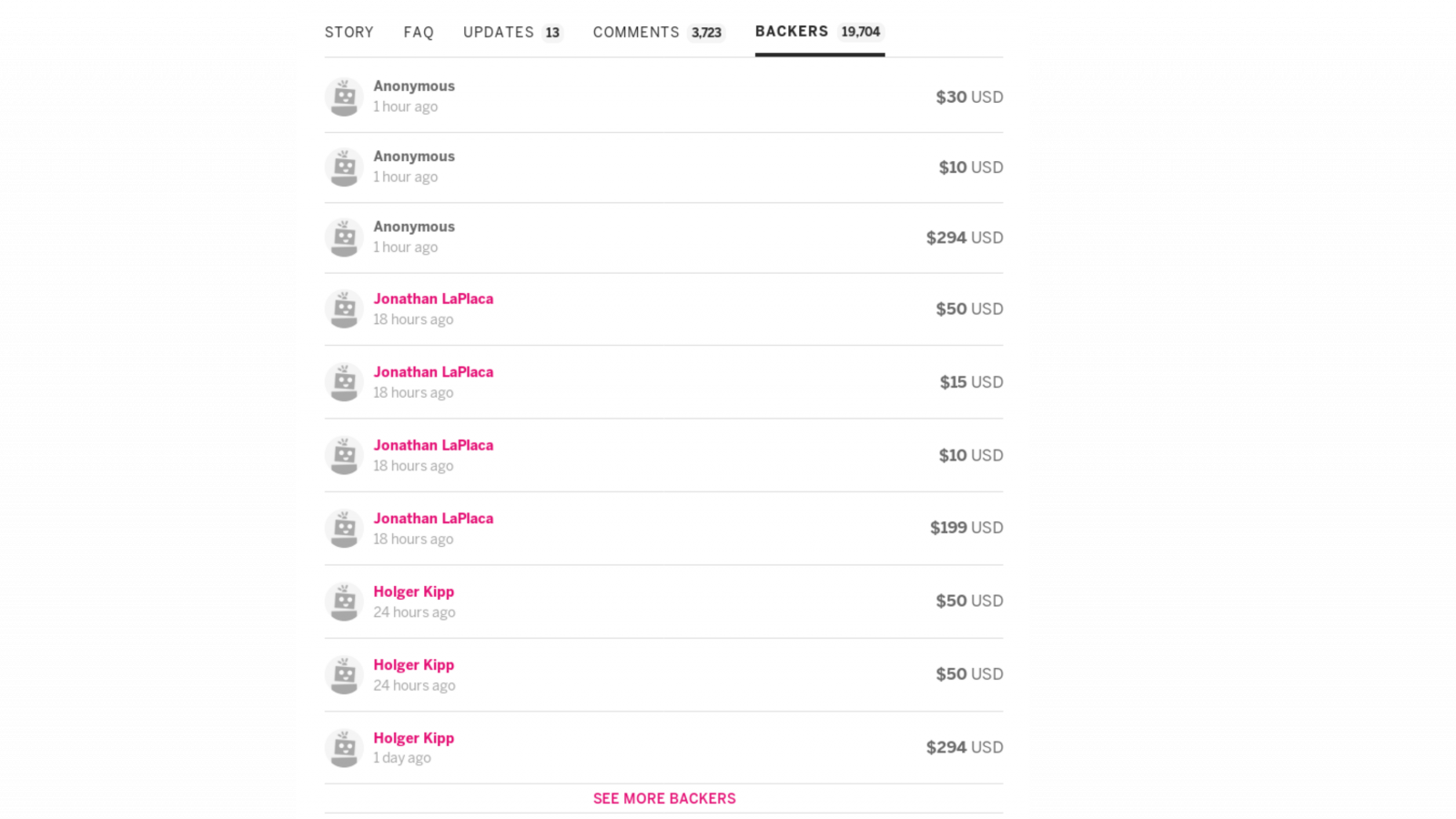 Already on May 1, the project’s first day, its founder Leo Cheung informed about the project’s success. The first goal of $20,000 was reached within a mere 18 minutes. 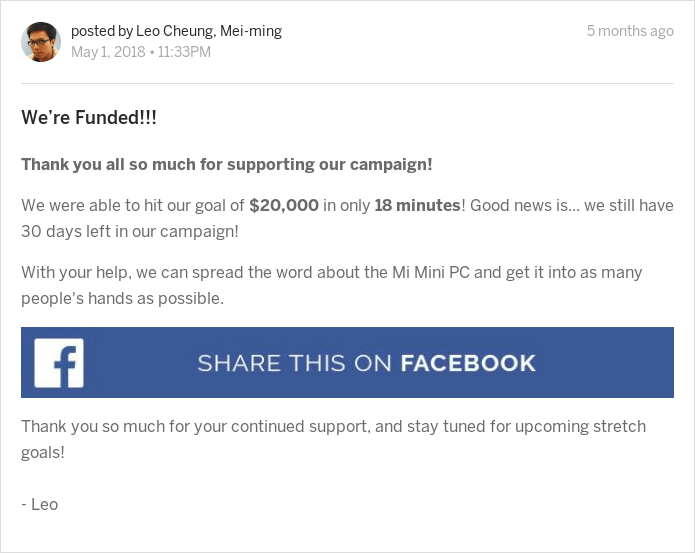 After a blitz start the project’s creators began to introduce new Stretch Goals with additional bonuses to the participants.

If the project collects $450,000, every participant will get a free USB fingerprint scanner. Two days later the goal was reached.

At $1,000,000 — a CPU upgrade and RAM increase to 16GB. When 1$1Mn goal was reached on May 22, the project’s creators informed that M3-7Y30 processor would be installed instead of the originally announced Atom x7.

On June 1, the creators informed that Indiegogo had allowed extending the subscription period for a week in order to reach the third Goal. The same update asked the participants to stay calm and assured them that the change would not in any way affect the deadlines for the gadgets’ delivery. 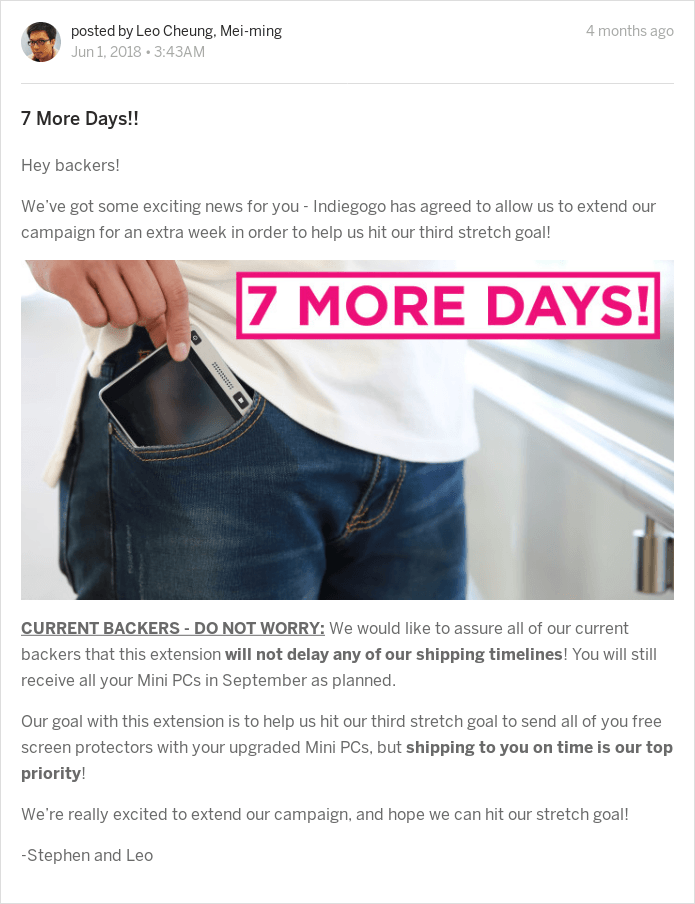 The Mini PC thanked all the participants and confirmed the soon-to-come production launch.

The team’s next message asked the users to stay calm and attached a «picture of a quality control section of their factory». 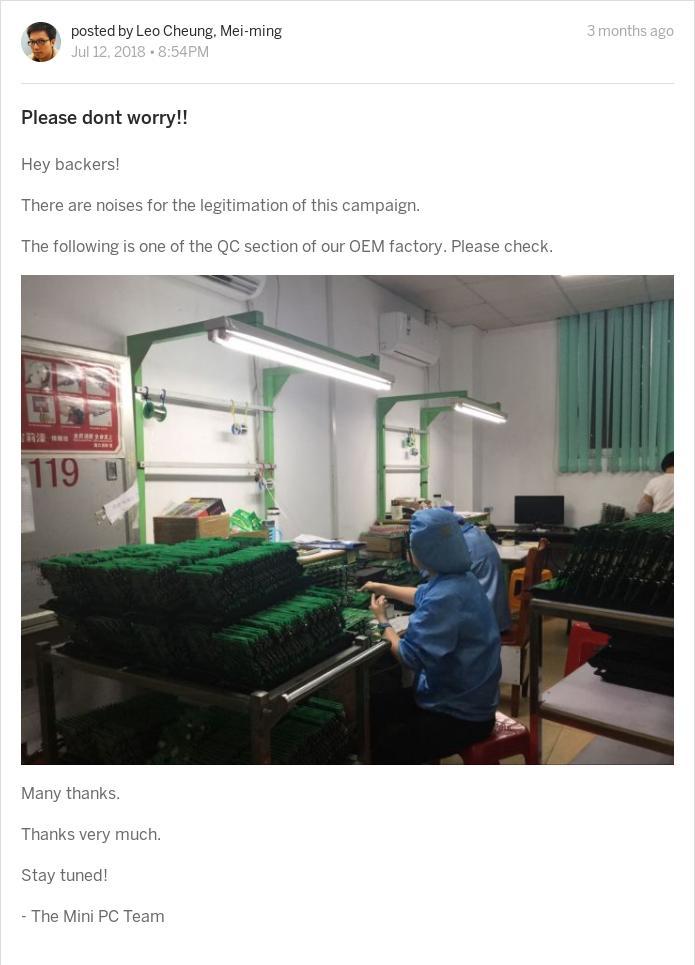 The only picture featuring the production facility failed to assure some participants that there were no problems with the project.

The next update from the company started to confirm the apprehensions. As the computer was to be fitted out with a more powerful CPU, a more efficient cooling system was required. 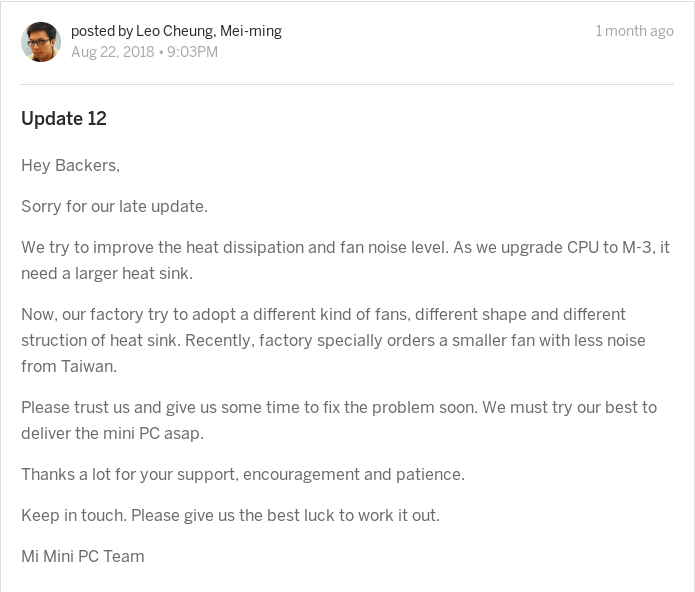 And then the engineers started to experiment with coolers of various sizes and shapes. Moreover, a special noiseless smaller-sized screw was ordered in Taiwan.

The team’s latest update read that the body’s dimensions had been increased to 6’’. Mass production was postponed until the end of October and the owners would get their gadgets in mid-November at the earliest. 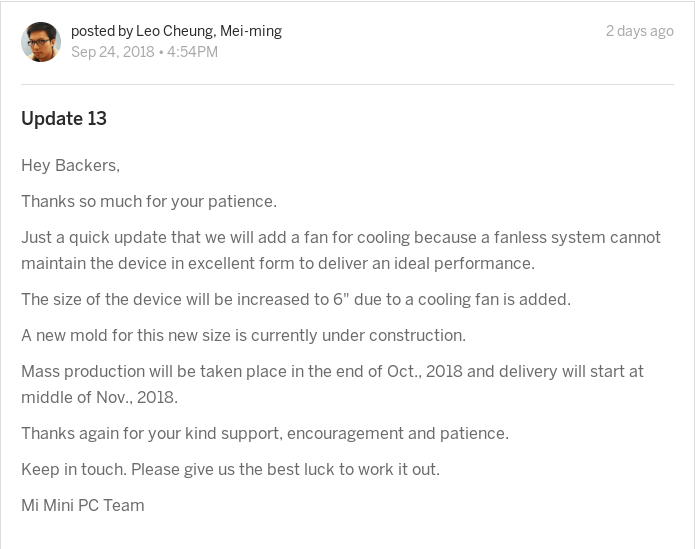 Let us recall that the team initially promised to start mass production in July with the product tests scheduled for August and the gadget deliveries planned for September.

Moreover, many users asked for a money return as they had paid for a device with different features while the confidence in the project has severely eroded.

Only Leo Cheung’s profile features his mini photo. The other team members are just listed on the lending page — their fill names, positions and the years in the profession are provided. There aren’t any links to social networks, personal sites or similar things.

Interestingly, many team members, including Leo Cheung, must be top notch professionals in their respective fields — some of them have worked in certain areas for 18, 20 and even 30 years. However, we have failed to find any kind of information about them in the internet.

Leo Cheung’s profile on Indiegogo provides very few details — the location (Fochan, China) as well as links to the site and the corporate page in Facebook.

The Company site looks as if it was written in the 2000s. Everything suggests that it is just a set of static HTML pages with a terrible design and strange coding.

The project’s page in Facebook has not been updated since May 14. The page is rated 2.1 of 5 based on the opinions of 7 people.

Many users point out that the design of Leo Cheung’s Mini PC strongly resembles that of Gole1 mini computer, whose developers successfully did fundraising in Indiegogo in 2016. MiniMachines publication writes in its review that Gole1 is just a slightly modified version of Pipo X3.

Moreover, after the project’s launch, Kickstarter featured an identical one, but Leo Cheung advised that somebody had just copied all information from the Mini PC page on IGG. After the Mini PC team contacted Kickstarter, the project was removed.

True, the team may have encountered some problems and is now trying to promptly resolve them while the keen demand for the gadget may be the reason for a production delay.

But many questions still remain. Why is there such scanty information about the creators on the project’s page? Why is the device so similar to the old versions by other manufacturers? Moreover — was production launched in July as planned?

We turned for comment to the project’s developers on Facebook and sent an e-mail to hi@mipcworld.com. If we get an answer we are sure to update the article and share with you the point of view of the project’s creators.

Indiegogo is a convenient alternative to the other crowd funding platforms, for unlike Kickstarter, for example, it enables to launch a project from any place in the world. In addition, users can order a ready-to-use product on the web site, while startups do not have to look for intermediaries. Moreover, a bank account will suffice to launch and project.

One of Indiegogo’s useful potentialities is a «flexible goal» that allows a project creators to not return the money raised even if the goal has not been reached.

So, according to the platform’s rules, if you have transferred money to an Indiegogo project, you are most unlikely to recover it.

Indiegogo is indeed a convenient site, but unfortunately, it is precisely the platform that often features scam projects that disappear with users’ money.

As likely as not, all that remains for those still expecting to get the most powerful pocket computer, is to hope for the business integrity of the team and Leo Cheung in particular (if he is an actual person).

A tip to all our readers

Please always verify the information on projects you want to support.

Scrupulous startups should do their best to ensure that one can easily find detailed information on their project and team in the network.

They should provide a detailed and logically relevant plan and progress of the project. Because vague wordings and scanty information about its creators as well as in no way substantiated regalia and professional expertise are valid reasons for a skeptical attitude towards the project.

Read more
in our Telegram