How do regulators influence the Bitcoin rate?

The Bank for International Settlements published a report which discloses the influence of regulators on the price of the leading cryptocurrency. According to the report data, the news can be divided into...

The Bank for International Settlements published a report which discloses the influence of regulators on the price of the leading cryptocurrency. According to the report data, the news can be divided into...

The Bank for International Settlements published a report which discloses the influence of regulators on the price of the leading cryptocurrency.

Thus, events related to a general or total ban on cryptocurrencies and their circulation in accordance with the law on securities, significantly drop the rate.

The news about the struggle against cryptocurrencies under the auspices of the law against money laundering and terrorist financing has a slightly less negative effect. An increase in the rate accompanies the news about creating a legal framework and special laws for the crypto market. Meanwhile, the statements of the states on the possibility of issuing national cryptocurrencies do not affect the rate in any way.

Researchers concluded that the crypto market relies heavily on traditional financial institutions. One of the key features of the cryptocurrency, due to which the legislators still find it difficult to regulate, is that cryptocurrencies are inherently unlimited and do not need legislative participation.

The main newsmakers regarding market regulation, as it turned out, are China, India, Japan, the United States and Britain. Another proof of the exposure rate is the difference in the price of the Bitcoin in different jurisdictions.

As an example, the authors cite in March 2017, when the SEC denied the Winklevoss brothers the Bitcoin-ETF (a traded fund linked to the BTC, read for more details). Within 5 minutes after this statement, the Bitcoin lost 16% in price (this can be seen on the 1st chart). The second graph shows the rate’s reaction to the order of the Japanese Financial Services Agency to tighten procedures for the prevention of money laundering, handed down to six crypto-exchanges in June 2018. 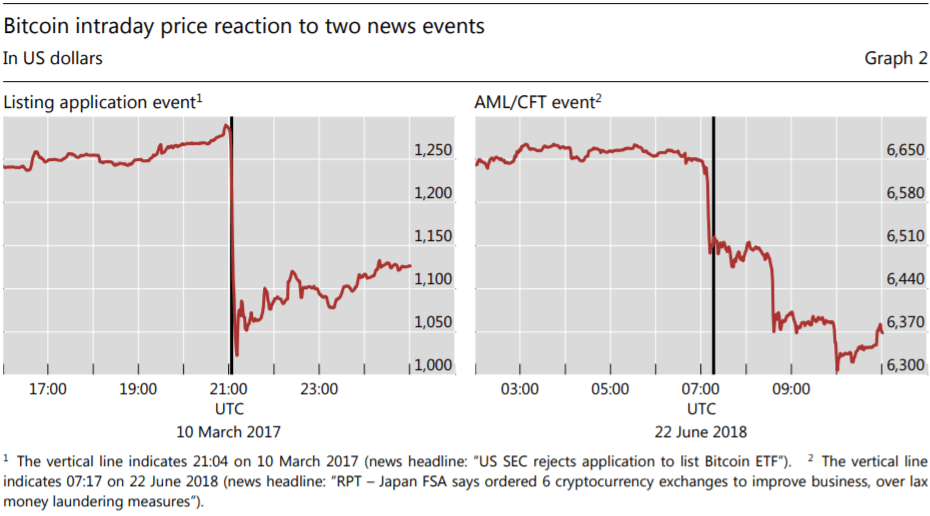 Researchers explain this by the fact that the conversion of conventional money into cryptocurrencies occurs through regulated organizations (for example, exchangers, online wallets and crypto-exchanges).

«International arbitration still remains limited. Agents do not have unhindered access to foreign cryptomarkets — you need to establish a bank account in the appropriate jurisdiction for this. This is the reason why the market remains fragmented and needs national regulation», the researchers note.