The messenger service Telegram has started testing its External Secure ID service, which will be a convenient way to identify users on the new TON (Telegram Open Network) platform. The service will combine...

The messenger service Telegram has started testing its External Secure ID service, which will be a convenient way to identify users on the new TON (Telegram Open Network) platform. The service will combine...

The messenger service Telegram has started testing its External Secure ID service, which will be a convenient way to identify users on the new TON (Telegram Open Network) platform. The service will combine passport data, driver's license, information about bank accounts, and other important information about the user for fast and convenient confirmation of their identity.

The use of passport data on a blockchain platform may seem strange for those who use cryptocurrencies and appreciate them, including for their anonymity. But Telegram is doing just that. This will avoid possible claims from financial regulators and prevent money laundering using cryptocurrencies.

The messenger will only access the information if the user agrees. Verification of the data will occur by partner services. Among the companies that already have access to the test version of the technology is the Qiwi payment system.

According to the TON roadmap, the developers had to launch the External Secure ID during the first quarter of 2018 so that by the summer the service would already be available to all users. In the second quarter, the company will deploy a prototype network for testing. By the end of the year, Telegram plans to complete testing and security audit on TON, issue a stable version, and make available a cryptocurrency wallet. 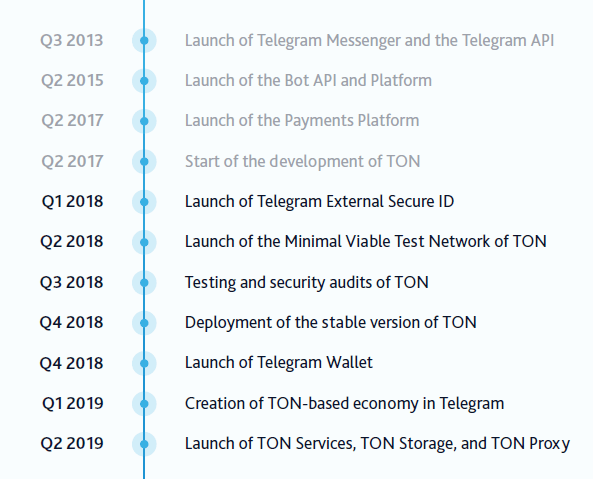 To develop its own blockchain platform, Telegram raised $1.7 billion in two rounds of a private sale of its own future cryptocurrency. Telegram's financing model differs from the classical ICO. To participate in the project, 175 carefully selected investors were accepted. For example, those who fell under U.S. economic sanctions were not allowed to participate. Each investor contributed at least $1 million. Telegram has not released the names of the investors.

Recently, the messenger WhatsApp has added a new function that expands the capabilities of group chats and, in many ways, copies group chats of Telegram. Now available as an application for Android and iOS, you can add a description of the group, change the privileges of users, and search for users by name. The total users of WhatsApp is now more than 1.5 billion, but only about 200 million users use the group chat rooms, which is comparable to Telegram's patrons. At the same time in Pavel Durov's messenger, group chats are very popular and the number of active users are growing all the time. So, WhatsApp is preparing for a serious competitor.