NFC for your phone: what it is and how to use it.

The development of mobile technologies is always looking to develop more understandable and user-friendly interfaces.

The development of mobile technologies is always looking to develop more understandable and user-friendly interfaces.

Wireless technologies such as Bluetooth and NFC are significantly expanding smartphone interactions with other devices. Smartphones are no longer just a means of communication, photo and video sharing, and an audio player. For many users, they are a full-fledged work tool that they use to coordinate their work with colleagues, monitor their workflow, and even manage a business. They have also become indispensable household items outside of working hours. You can keep an eye on your house and children, follow the general daily routine, and of course shop with your smartphone.

Bluetooth is most often used to connect peripheral devices like a keyboard, mouse, printer, etc. to a computer or smartphone, or to transfer photos from one phone to another, for example. It is important to note that Bluetooth allows you to connect several phones to one device at the same time.

NFC (Near field communication) is a wireless data transmission standard that allows you to establish a connection between two devices. The NFC radius of action is significantly less than that of Bluetooth - up to 20cm. This determines the methods and the specifics of the use of this technology.

WHY IS NFC NEEDED FOR A SMARTPHONE?

Most users use the NFC function of their phone to pay for purchases. It is not very convenient to carry a wallet with several bank cards. In addition, many store bonus cards can also work via NFC. As a result, contactless payment using NFC on a smartphone, smartwatch, or tablet has become very popular in the United States and Europe over the past few years. 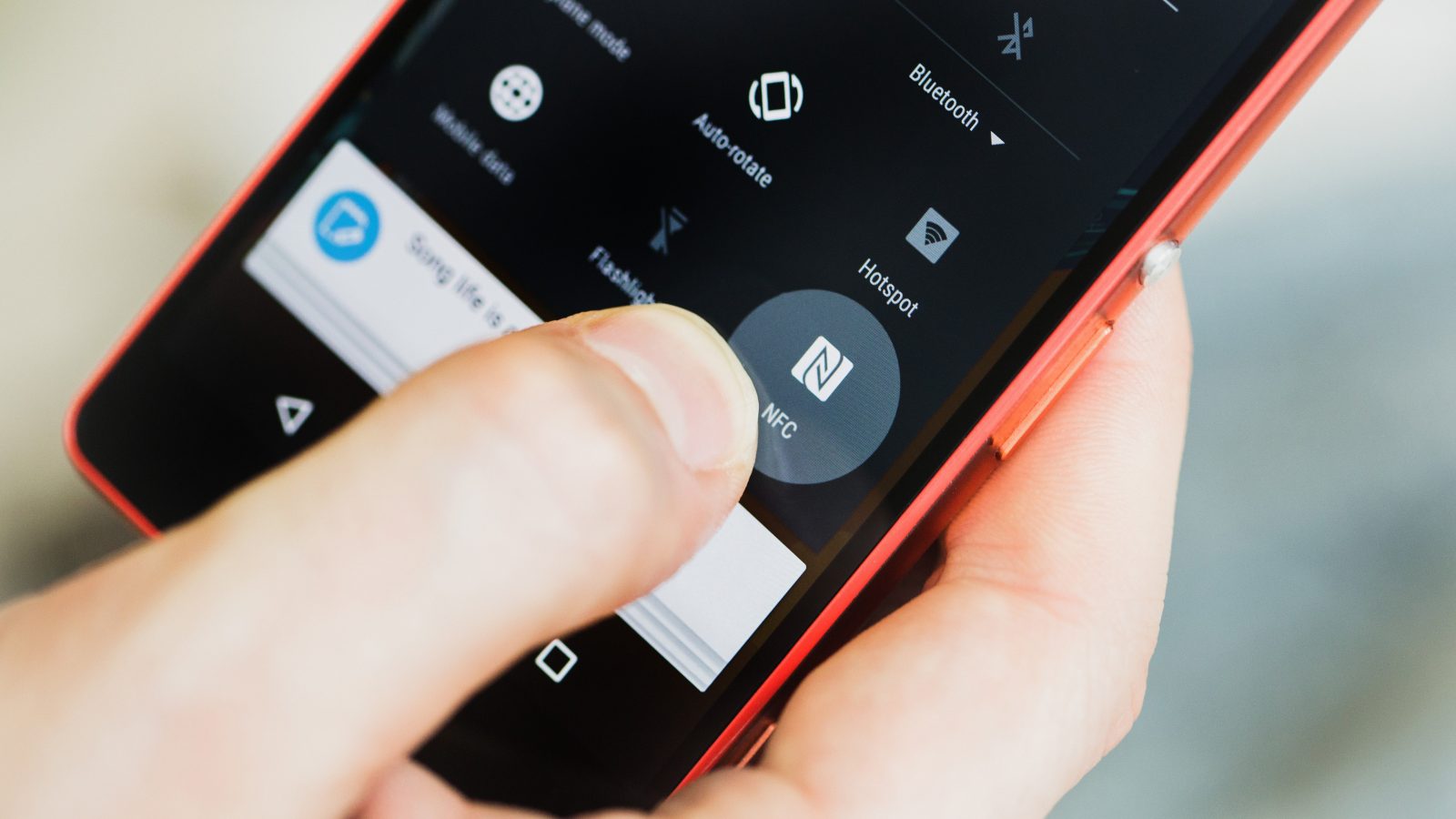 However, the NFC function on your phone can do more than just make shopping more convenient. NFC is also a great replacement for transportion cards, passes, paper movie tickets, etc. The implementation of NFC technology can be convenient for users and beneficial for the organization that decides to use it in almost any case that requires validation in order to pass, drive, or access.

In general, an NFC module is needed to transfer data of a very different nature - from contacts and business cards, to photos and music. An NFC chip embedded in a billboard can be used to enhance contextual advertising that can be seen when a user puts their smartphone near an ad. NFC is also a convenient way to set up a Wi-Fi connection with just one touch, without all of the hassle of entering a long password into your phone. Some modern printers even allow you to print files by simply holding a phone with an NFC module next to it. However, NFC might be too slow when transferring large files. In this case the best choice would be Bluetooth, for example.

NFC technology is based on the principle of magnetic induction. One of the main components of an NFC module is the antenna. When two NFC modules are placed at a sufficiently close distance, the electromagnetic field of one of them begins to affect the second device. Data transfer takes place due to a change in the amplitude and phase of the voltage.

Devices with an NFC function can act as a passive chip, an active device for reading NFC tags, or as both - for two-way communication.

Passive mode is when the device works like a chip in a bank card. It allows information to be read, even from a discharged phone. Passive devices do not need an energy source and are triggered by the induction of the magnetic field of the second NFC device. NFC modules for emulating smart cards work according to this principle.

In active mode the device scans for any other NFC modules. The second device can be either a passive NFC tag or another active device.

Peer-to-peer mode is intended for two-way data transmission where two active devices both receive information and provide it for reading.

NFC devices are compatible with RFID, an older technology for identifying objects with special RFID tags. Unlike NFC devices, an RFID tag cannot read information itself - a special scanner is needed to do this.

There are many significant differences between NFC and Bluetooth. However, the technologies are not completely different from one another, and they can even complement each other. For example, by using NFC you can initiate a connection of devices for subsequent data transfer over a faster network type — like Bluetooth or Wi-Fi.

HOW TO SET UP NFC 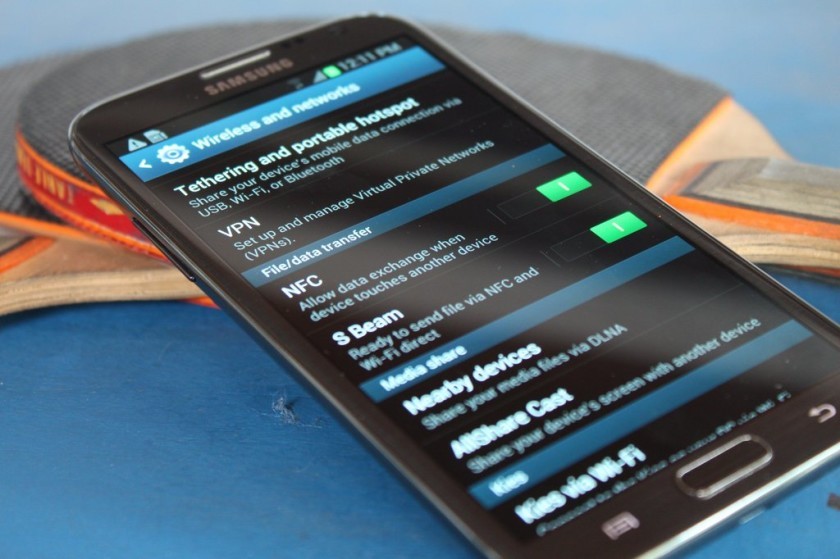 HOW TO CHECK IF NFC IS WORKING ON YOUR PHONE

Apple devices that support NFC do not need any additional configuration: the NFC chip will work when it is in range of another device.

In order to use your bank cards with Apple Pay you must add them to the wallet in  the app. You can only attach a bank card to the wallet if it supports contactless data transfer. Most modern cards support this technology, and if you have an old card, just ask the bank to reissue it.

The Android system has supported NFC since version 4.4 and allows more flexible customization of the module.

In order to set up payment using NFC you need to install the Google Pay or Samsung Pay application for smartphones. In order to attach a bank card, you can take a photo of it or enter the data manually.

HOW TO USE NFC ON YOUR PHONE FOR MAKING A PAYMENT

Using NFC is extremely easy once you have attached a bank card. All you have to do is bring the smartphone close enough to the payment terminal.

The phone must be unlocked for the payment to go through. If you use NFC it is very important to protect your phone with a password or, for example, with fingerprint or face recognition technology so that no one else can use it to make payments. 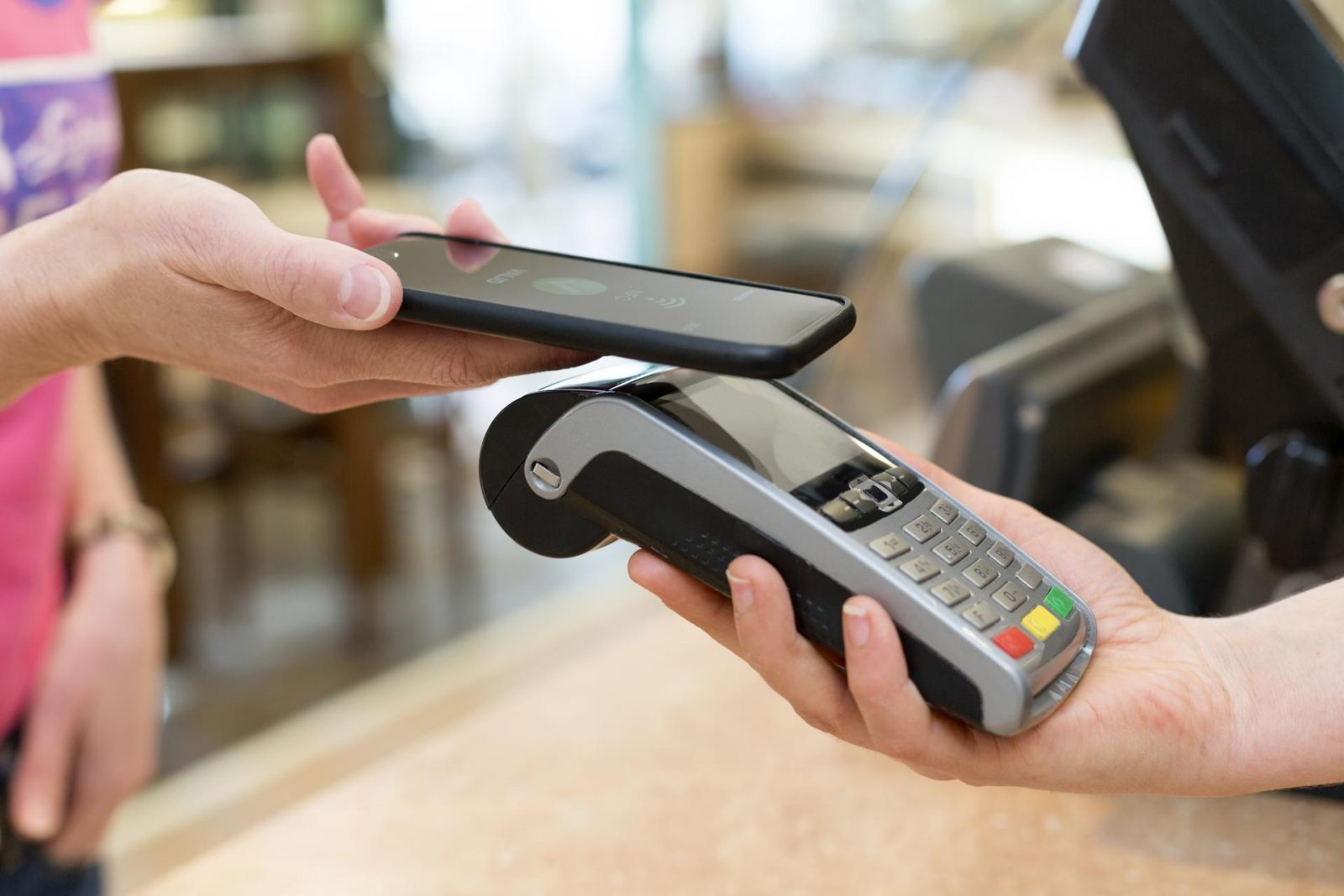 HOW TO KNOW IF YOUR PHONE SUPPORTS NFC

The presence of NFC on phones is already a common thing for most users. Many manufacturers are even integrating an NFC module into budget smartphones.

Apple introduced its own payment system Apple Pay, based on NFC, in 2014. The technology is supported by all Apple smartphones, starting with the iPhone 6, as well as modern versions of the iPad and Apple watches.

As for Android devices, the situation may differ for different manufacturers since they have their own development strategy and there are different specifics of the market they are targeting.

Google and Samsung introduced their payment systems almost simultaneously in 2015.

Google Pay works on all NFC-enabled Android devices. So before buying a smartphone it's best to check on the manufacturer's website if it has an NFC module.

Samsung Pay is available for use on Galaxy devices and Samsung Gear smartwatches.

NFC is a very promising technology: its ease of use is combined with relatively low cost and low power consumption. Therefore, it seems incomprehensible why all smartphones do not support NFC.

For example, not all Xiaomi phone models are equipped with NFC. The lack of NFC is due to the low popularity of the technology in China and other East Asian countries. These are the markets that the company's products are primarily focused on.

At the same time, contactless payment in China is very popular. But most users do not use NFC, but instead use QR codes. The popularity of this method is due to the widespread use of the Chinese messenger WeChat, which has built-in payments using QR codes. To make a payment you need to read the code with a smartphone camera. In China, QR payments are used for a variety of things: purchases, peer-to-peer transfers, and paying taxes and fines.

See also: WeChat replaces the Chinese passport, banks, and even the registry office.

As with many other modern data transmission technologies, security and privacy are critical to NFC. 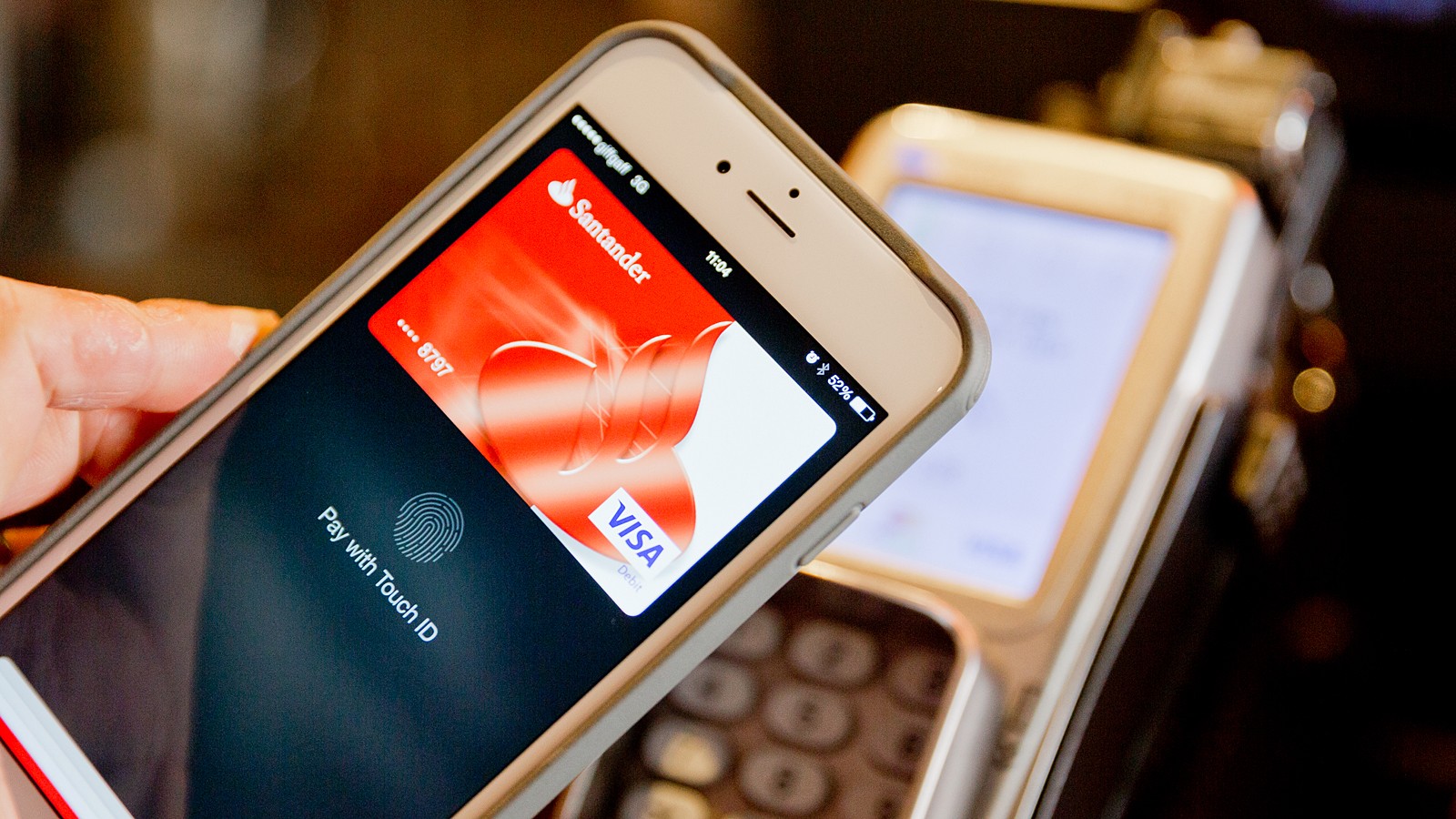 One possible way to steal data is by listening to the radio frequencies on which the NFC device transmits information. The effectiveness of this method greatly depends on the type of device: a passive chip is much more difficult to listen to. In any case, the attacker must be at a distance of several meters from the NFC module.

The NFC protocol does not protect against such eavesdropping. This task is given to cryptographic algorithms that operate at a higher software level.

NFC data transmission can be easily interrupted by special radio jammers. However, it is impossible to change the transmitted information due to the fact that the NFC receiver is very sensitive to signal changes.

In theory, NFC can be used to transfer a malicious file to a device. But this requires being very close to the victim.

The purpose of intercepting an NFC signal or seizing control of a device in the first place could be to gain access to someone else's electronic wallet or to compromise sensitive data. However, all types of attacks on NFC devices are significantly limited to a small range. In fact, the field of application of NFC, or data transmission at close range, is at the same time a factor ensuring the user's safety.

NFC technology has proven to be very successful in the payments industry. It is gradually being introduced in other areas: transport, advertising, and access control.

Not only smartphones, but other gadgets also support NFC: smartwatches, fitness bracelets, and payment rings.

Imagine that you do not need to go to the application to view physiological indicators and recommendations after your morning run — you just put the bracelet to your smartphone and the voice assistant will tell you all of the relevant information.

NFC chips built into gadgets are already used for travel on subway or bus, as a pass at work, or as a ticket to an event. Among the promising areas is the use of NFC for peer-to-peer money transfers between users without the participation of a third party, such as a bank. There also needs to be an application that can quickly synchronize the two devices.

In many ways, the further development of NFC depends on app developers, There task is to interest users in new ways of using chips, as well as to improve existing solutions.