How a quantum computer works: what the future will be in simple words

A couple of years ago a journalist decided to play a trick on Canadian Prime Minister Justin Trudeau by asking him about quantum computers during a press conference at the Canadian Institute for Theoretical Physics in Waterloo.

A couple of years ago a journalist decided to play a trick on Canadian Prime Minister Justin Trudeau by asking him about quantum computers during a press conference at the Canadian Institute for Theoretical Physics in Waterloo.

Trudeau, not at all embarrassed, briefly explained the basic operational principle of these devices. This made him a real star in the eyes of the progressive public. Why did the journalist consider this question the most tricky to ask him? Is it really possible to understand what quantum computing and quantum mechanics are without being a specialist? This is not an easy task, but let's try. So, we'll give you a lesson in quantum computer for dummies.

The history of the creation of quantum computers.

At the center of the very idea of quantum programming is a person who is well known to anyone who is even slightly interested in physics. The famous American scientist and popularizer of science, Richard Feynman. He is a Nobel laureate in physics and suggested the possibility of the existence of a quantum computer back in 1981. It happened at a joint conference organized by the IBM Corporation and MIT (Massachusetts Institute of Technology). At that time no one had seriously thought about putting this idea into practice yet. Even in theory, it seemed quite difficult. Quantum mechanics, in contrast to classical mechanics which we all studied at school, describes phenomena at the level of atoms, electrons, photons, and other elementary particles. And the quantum effects that were supposed to be used to create the first quantum computer appear on a microscopic scale.

The physical foundations on which traditional computing is based on have forced scientists to move to the micro level in search of new opportunities. It is based on transistors, which every modern computer has millions or even billions of them. Each of them can be in an "open" or "closed" state at a certain point in time - like an electrical switch. These two states represent the very zeros and ones that helps a person communicate with a computer (and vice versa). As technology advances, manufacturers are installing more and more transistors on computer processors. This increases their speed and the computing capabilities of technology. But there is a physical limit to everything and we are very close to it in this area. Earlier, the computing power of the processors being produced doubled approximately every two years, but today this rate is slowing down before our eyes. At the same time, the needs of humanity for computing are constantly growing, outstripping the development of electronics.

What are qubits for quantum computers?

So, if a bit is one of two conditional points (1 or 0), then a qubit can be imagined as a sphere with poles at the same points - 1 and 0. A qubit can also take the value of 1 or 0. But besides that, it can be in a state of superposition. That is, have any of the possible values lying on the surface of the sphere. And all of this at the same time.

But what exactly is located on the surface of the sphere? Maybe a qubit has a variable (floating) value? In a sense, this is true. But the difficulty is that it is impossible to find out this value for a specific moment in time, as it is done for ordinary variables. To put it in the simplest possible terms, a qubit is like a magic 8 ball. If this ball is asked a question, then the answer can be one or zero. But they will appear at a different rate of probability. It is the probability of appearing as a value that is "stored" in superposition.

The quantum entanglement effect works hand in hand with the superposition principle. Two interconnected quantum particles synchronously change their state, even if there are millions of light years between them. Entanglement makes it possible to collect qubits into "sets". If a set of two bits can store one specific sequence of two values (zeros or ones), then a set of two qubits contains a superposition of all of the possible sequences of these two values. And this is a much larger amount of information.

How a quantum computer is designed. How does it work?

After the emergence of the concept of a quantum computer, dozens of scientists around the world tried to create its physical embodiment. The main question is: what can be used as a qubit? In 1994, European physicists Peter Zoller and Juan Ignacio Cirac described a scheme for using a special ion trap as the basis for a quantum computer. It was at this moment that it became clear that scientific theory and practice had come face to face.

The physical "incarnations" of qubits are not only ions. For these purposes, scientists have tried and are trying to use electrons, atomic nuclei, photons, superconducting materials, and even artificial nanodiamonds. More recently, an optical quantum microchip was developed which an optical computer could theoretically be created using manipulation of the quantum states of light. The two main problems that competing research groups are trying to solve are the lifetime of the qubits and their number in the system.

It is very easy to bring a quantum system out of the superposition state. Even a single photon that collides with a qubit can do this. That is why the question of whether the brain can be called a quantum computer has rarely been raised by scientists - it is difficult to imagine quantum computing in a biological environment. Qubits, even in specially created conditions (in a vacuum and cooling to ultra-low temperatures) are destroyed in a split second. The presence of a number of other qubits further shortens this period. Now imagine that you need a working structure of dozens or even hundreds of such capricious particles. Not a trivial task, is it?

A separate topic is how to program on a quantum computer. The programmer in this case is dealing with a hybrid device. A quantum computer consists of elements of the conventional and quantum type — in order to be able to enter data and interpret the results. As a result, quantum and classical codes are combined into one program. There are different programming languages for quantum systems (for example: QCL, or Quantum computing language), but at the moment they perform not a practical, but rather a research task. They make it easier for researchers to understand how quantum computing works. 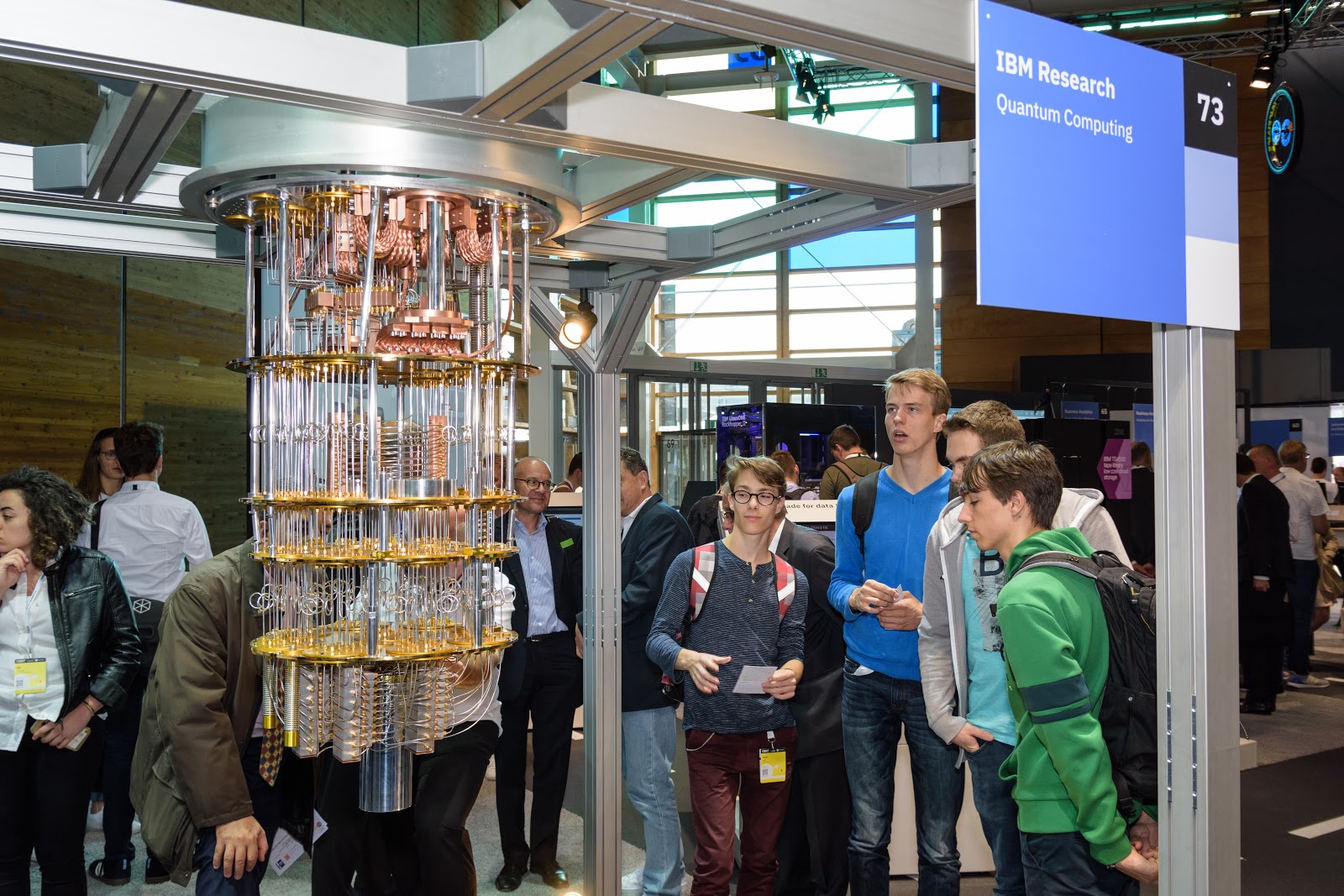 Also in 1994, the American scientist, Peter Shor, developed the first (of many) quantum algorithms for factoring an integer into prime factors. Surprisingly, breaking down a long (several hundred digits) number into two prime factors is an incredibly time-consuming task even for the most powerful modern computers. Most modern encryption and information protection systems are built on this. Shor proved that a quantum computer that contained 1,000 or more qubits could crack any code in just seconds.

The trick is that a quantum computer doesn't check possible options sequentially like a conventional processor does, but does it simultaneously. The speed of information processing increases enormously using this method. Shor's work showed only one of the areas of practical application of a quantum computer. The possibilities of quantum hacking of encryption systems (including for the military) immediately attracted considerable resources to this area of development. For example, China plans to spend more than $11 billion to build a new quantum center. The EU and the US are also keeping up with the PRC; private companies such as Google and IBM are also investing in quantum development. Russia is also making its contribution to the creation of a quantum computer.

One of the most powerful quantum computers in the world (51 qubits) was created in 2017 by the research group of Mikhail Lukin, a professor at Harvard University and co-founder of the Russian Quantum Center. Scientists work with "cold atoms" - particles cooled close to absolute zero. So far, these experiments are being carried out in Harvard laboratories. But Gazprombank already invested $1.5 million in 2018 into the Russian Quantum Center in order to develop a project on quantum machine learning. This development is being carried out in three main areas:

At the same time the Russian Quantum Center, the Institute of Solid State Physics of the Russian Academy of Sciences, MISiS, VNIIA Dukhov, and Moscow State Technical University Bauman are continuing their research for the development of Russian quantum hardware. The planned capacity of a Russian-made quantum computer is still several qubits. This is undoubtedly a lag in the quantity, but not in the quality and value of the technologies being developed.

Forecast of the development of quantum computers.

In theory, the most powerful quantum computer ever built is the D-Wave 2000Q, the brainchild of Canadian company D-Wave Systems. The price of the novel computer is about 15 million dollars. It houses a quantum chip containing 2,000 qubits. In fact, the problem is that this is not a quantum supercomputer at all, but a so-called quantum annealing device. This system can solve a very highly specialized problem, but it is still quite a long way from a real practical application.

Meanwhile, in March of 2018 a presentation of a 72 qubit quantum computer took place. Google announced its creation. It differs in greater performance with a low error rate - but all these advantages, again, have been realized only in the theoretical plane.

But what are the possibilities of using quantum computers, apart from code breaking we mentioned earlier? Today there are a lot of them. What cannot be done with the most powerful modern computers, quantum systems will be quite capable of doing. If we assume that real quantum "hardware" will appear in the near future, its advantages over current computing systems can hardly be overestimated. Searching huge databases, developing new drugs, decoding the genome, optimizing transport routes, space exploration, meteorology, and nuclear energy research require an incredible number of solutions. Such tasks will be the main areas of application of quantum computers in the future.

Is there a quantum computer now? Yes, absolutely. Is it used to solve specific practical problems? Not yet. But the activity of researchers in this area inspires some optimism, albeit very cautiously. Remember, until recently the most ordinary smartphone would have seemed to us a miracle of technology! So why shouldn't the quantum computer turn into a pleasant everyday life in the coming decades and open up new exciting horizons for us?