A short period of time has elapsed since our previous review and the bears have dropped all support levels ($4,200-$4,000) continuing to further press the price down. We have witnessed a typical panic sale...

A short period of time has elapsed since our previous review and the bears have dropped all support levels ($4,200-$4,000) continuing to further press the price down. We have witnessed a typical panic sale...

A short period of time has elapsed since our previous review and the bears have dropped all support levels ($4,200-$4,000) continuing to further press the price down. We have witnessed a typical panic sale these days. At the time of writing, the market capitalisation is $129, 738, 848, 820.

On 25 November the market’s main coin hit its new all-year low at $3,657 that was followed by a correction. At the moment of writing, the price is moving in the local ascending channel from the $3,657 minimum. The $4,200 level acts as the resistance area. ЕМА50 is at $4,095 and it would be a positive signal for the bulls if it consolidates at this level. The MACD indicator has moved from the sell zone to the buy one — another good signal for the bulls.

Within an hour timeframe, indicators point to the BITCOIN’s emerging price climb. But let’s not make any hasty conclusions. 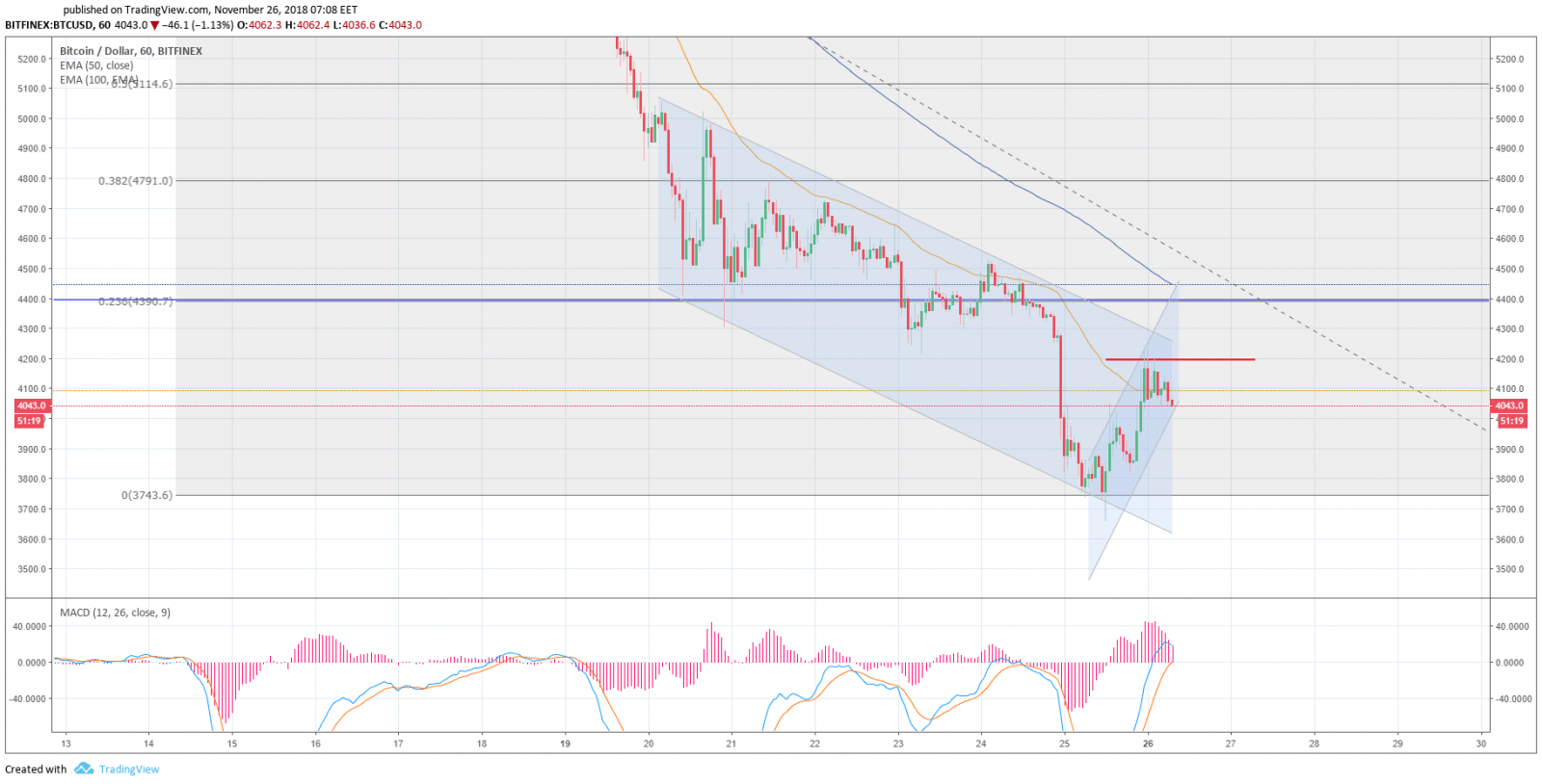 The price is moving near the lower border of the ascending channel. The $4,200 acts as the first resistance level and overcoming it will open up the way to test the $4,400 and $4,619 levels (ЕМА50). The MACSD indicator is in the sell zone reversing to the buy zone.

Bears continue to dominate the daily time frame. We cannot rule out testing $3,500 -$3,600 where most buy orders are. Anyway, the bottom is not far off (or has already been passed). That’s why there are big volumes of buy orders. Such traders are not interested in the profits of a few percent, for they have long-terms plans. So, buying at the current levels will definitely generate profits already in near future. The first target is the $4,400 level.

Three positive pieces of news came yesterday. The first one is, of course, that the price went above $4,000 and we are now expecting the $4,400 target.

The second news came from the USA, from where we have, so far, heard only about the SEC: the first US state has recognised Bitcoin as a means of payment and even allowed to use it to pay some taxes. The State of Ohio will start accepting Bitcoin payments for 23 kinds of businesses. The BitPay payment operator will provide these services for the government of Ohio. Legal entities will have to register on the OhioCrypto.com site. Josh Mandel, the State Treasurer, says that he sees Bitcoin as «a legitimate form of currency.» He added that he expected other states to adopt his initiative. In fact, it is a very strong signal for the industry.

The third good news is that the Bitcoin net’s hash rate has increased by 38% following the recent 50% drop. And as we all know, the coin’s value is proportional to its network’s hash rate. The market shows sparks of life, so we should not give up on it, it’s best to be patient.

Moreover, some channels carried the news about a huge influx of money into the industry. Over the last 4 weeks somebody bought 130,000 Bitcoins worth over $0.5bn. Most likely, they were major financial institutions. However, the news appeared on 26 October and after that the market plummeted, as we all know.

What to do now? If you are interested in a long-term growth (as we are in the editorial office), then the current price is excellent for making a long-term investment.

We wish you all an excellent week!