Yesterday, November 15, Bitcoin Cash network successfully completed a hard fork. In the run up to the event, the market split into two parts – some people supported the conservative Roger Ver with his Bitcoin...

Yesterday, November 15, Bitcoin Cash network successfully completed a hard fork. In the run up to the event, the market split into two parts – some people supported the conservative Roger Ver with his Bitcoin...

Yesterday, November 15, Bitcoin Cash network successfully completed a hard fork. In the run up to the event, the market split into two parts – some people supported the conservative Roger Ver with his Bitcoin Cash ABC, the Bitcoin Cash original client.

Initially, this coin was the favourite as there is back channel information about ties between the big mining equipment manufacturer Bitmain and Bitcoin ABC.

Others sided with the schemer Creig Wright who asserted that he would create exactly the bitcoin version Nakamoto Satoshi had in mind. Wright wanted to restore the bitcoin on its original version 0.1.0 issued already in 2009.

Eventually, both teams have launched their projects. Bitcoin.com pool added the first block to ABC blockchain. The protocol started to restore at block #556,766; this happened in SVPool. Roger Ver’s coin got BAB designation while Creig Wight’s project was named BSV.

The https://t.co/6EeRmpfaH7 pool now has more hash rate on it than the entire BCH network had earlier today.
Bitcoin is cash for the world! #BitcoinCash #bitcoincashfork pic.twitter.com/n2MqQ5mlfK

ABC’s hash rate is currently higher than that of Bitcoin SV.

The bigger part of the power capacity is in Bitcoin.com pools controlled by Roger Ver. On the morning of the same day he wrote on Twitter that more mining power was dedicated to Bitcoin ABC mining than the total Bitcoin Cash power.

According to some sources, the Bitcoin SV team tried to attack Bitcoin ABC blockchain, but the twitters on this score were later removed. 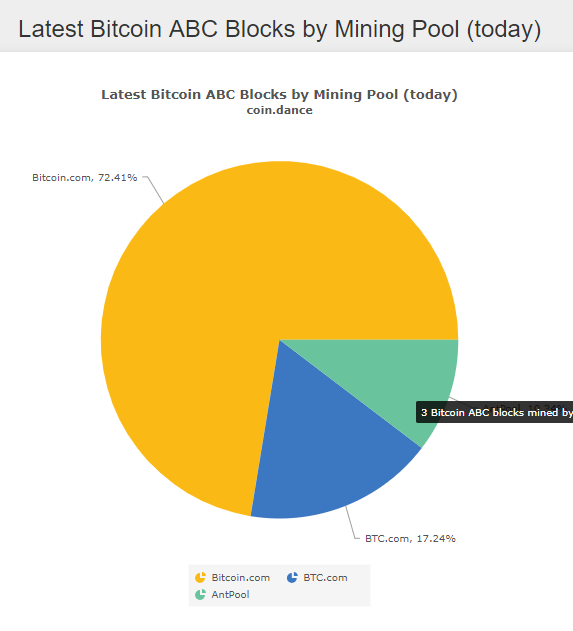 Which exchanges have expressed support for Bitcoin Cash hard fork?

Binance, Poloniex, Bittrex, OKEx, HitBTC, Huobi, Upbit and Kucoin have expressed support for the hard fork.
All trading floors supportive of the hard fork have closed down the Bitcoin Cash markets. Input and withdrawal of the new coins BAB and BSV is not operational until the network stabilises.