Scientists Learn How Moons Are Formed

Not only have researchers built a theoretical model, but they were also able to watch a moon forming around exoplanet PDS 70c.

Not only have researchers built a theoretical model, but they were also able to watch a moon forming around exoplanet PDS 70c.

Moons can be formed in different ways. Sometimes, a massive space object just draws another body to itself, and it becomes its moon. However, moons are generally formed at the same time as planets from clouds of dust and rock.

Researchers have recently discovered exoplanet PDS 70c undergoing an active growth phase. The space body is surrounded by a disk of dust, from which a satellite will be formed in the future. The process is taking place as far as 370 light years away from our planet, and researchers have been able to watch it using a powerful radio telescope.

The age of the discovered planet is less than 10 million years, which is very little in space terms. PDS 70c is still being formed: it already has two cores and it is actively sucking in matter from space. There are lots of rocks and dust at the distance of over 5.31 billion km from it, which will become building material for new celestial bodies. 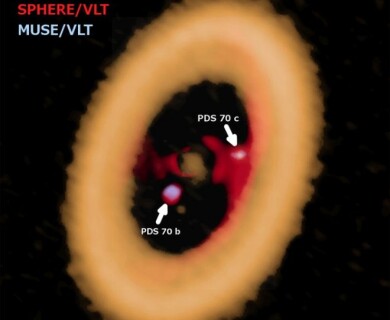