We all know perfectly well that the market does not stand panic. The price decrease down to $6,100 at the closing time on Wednesday (September 19) was followed by a powerful upward impetus. With that impetus,...

We all know perfectly well that the market does not stand panic. The price decrease down to $6,100 at the closing time on Wednesday (September 19) was followed by a powerful upward impetus. With that impetus,...

We all know perfectly well that the market does not stand panic.

The price decrease down to $6,100 at the closing time on Wednesday (September 19) was followed by a powerful upward impetus. With that impetus, the price rapidly reached the $6,550 level, whereupon slowly came back to its usual narrow range of $6430$ — $6380 (see 1 HOUR timeframe chart).

If you read our previous forecast, you must have made pretty good money on the growth from the $6,100 level by now! Our congratulations!

The September 19 decrease and the subsequent growth overlapping it is called bullish engulfing. On the whole, the market picture has not changed and the price has not gone beyond the important support and resistance levels range (green lines on the 4-hour timeframe), where it is now and coming close to $6,600. We wrote about that level earlier. It should be noted that, as of this writing, BITCOIN is trading close to the $6,600 level and has broken through it (HI 6645$). Following the breakthrough, the price corrected to $6,550 (as shown by the arrow on the chart), i.e. it cannot be said that many large-scale short positions were opened, otherwise, the price would have gone deeper. The long and fast moving averages (MA9 и MA50) are facing upwards with the fast one crossing the slow one bottom upwards signaling an upward movement. 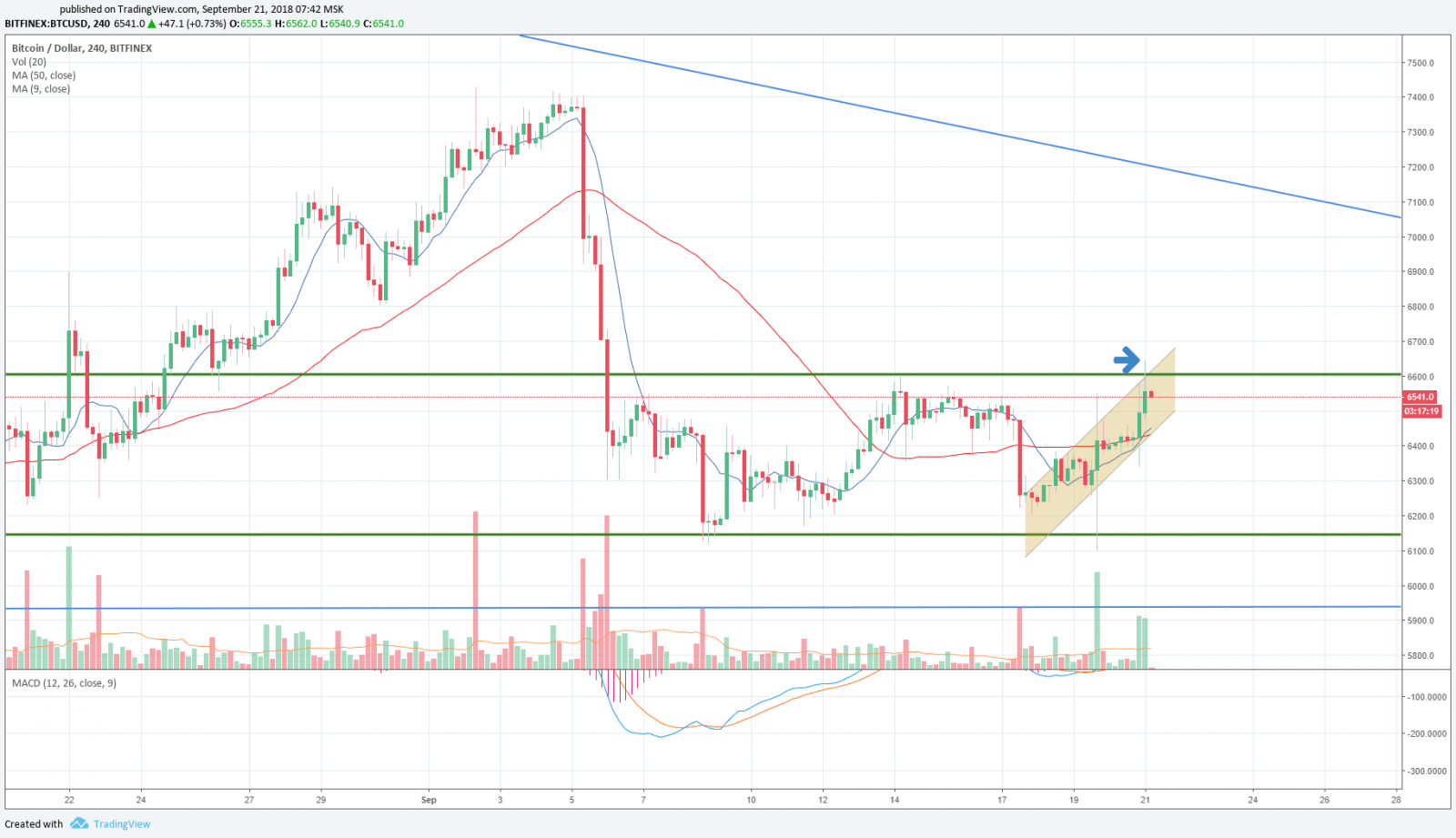 Describing the current situation, we cannot leave out ETFs. The decision on ETFs was put off again, as was expected. This time, there was no response from the market, more so that the postponement of the decision fell on the beginning of the growth phase and the expiry of scheduled futures contracts. Generally, there is an impression that too much attention is paid to the ETF issue: the subject is just being used for speculation.

Interestingly, the news about Zaif cryptocurrency exchange being hacked has not affected the main cryptocurrency’s rate either. Information about the hacking attack on the exchange was disclosed yesterday at 08:09 pm. In fact, the hacking incident took place a week ago, on September 14 at about 05:00 pm Japanese time, but it was not reported until yesterday. Hackers gained unauthorized access to the exchange’s hot wallets and stole about $60 million worth of BTC, BTH and Monacoin.

On the daily timeframe, we are seeing the movement within the ascending channel, where the first important goal would be the overcoming of the $ 6,600 level. If the pair gains a foothold above that level, it will open the way for a further upward movement. Our advice for today is to fix part of the profit from the upward movement and leave the other part in the long position. Opening new transactions at this level is risky.

The first levels are $ 6800-6900, strong resistance stands at $ 7400, which we discussed in previous reviews. It seems to be a double bottom, which could well open the way to $ 7400 with a short consolidation.