Hello everybody! So, a decline whose probability we predicted the entire last week has not come as a surprise for you. And that doesn’t hold true for those who don’t read our materials. Our trading community...

Hello everybody! So, a decline whose probability we predicted the entire last week has not come as a surprise for you. And that doesn’t hold true for those who don’t read our materials. Our trading community...

Hello everybody! So, a decline whose probability we predicted the entire last week has not come as a surprise for you. And that doesn’t hold true for those who don’t read our materials. Our trading community is actively discussing our «Inverse head-and-shoulders» pattern theory (remember how long ago we wrote about it?). We wrote about this scenario and warned you about the level the price was sliding to. That’s why it makes sense to enable the notices on our channel (if they are disabled) and keep track of all market developments. Let’s look at the charts now.

On the hour timeframe, the price tried to reach the $4,400 level, but failed. It started to decline with a short stop in the $4,200 — $4,100 range. Support at the $3,800 level contained the decline and the Bitcoin price managed to consolidate a little. The EMA50 moving average crossed the EMA100 from top down — and that’s a decline signal. The price is under the moving averages, which currently act as resistance at $3,990 and $4,040 (EMA50 and EMA100, respectively). Support is at $3,800. The MACD indicator is in the sell zone, but tends to enter the buy zone. 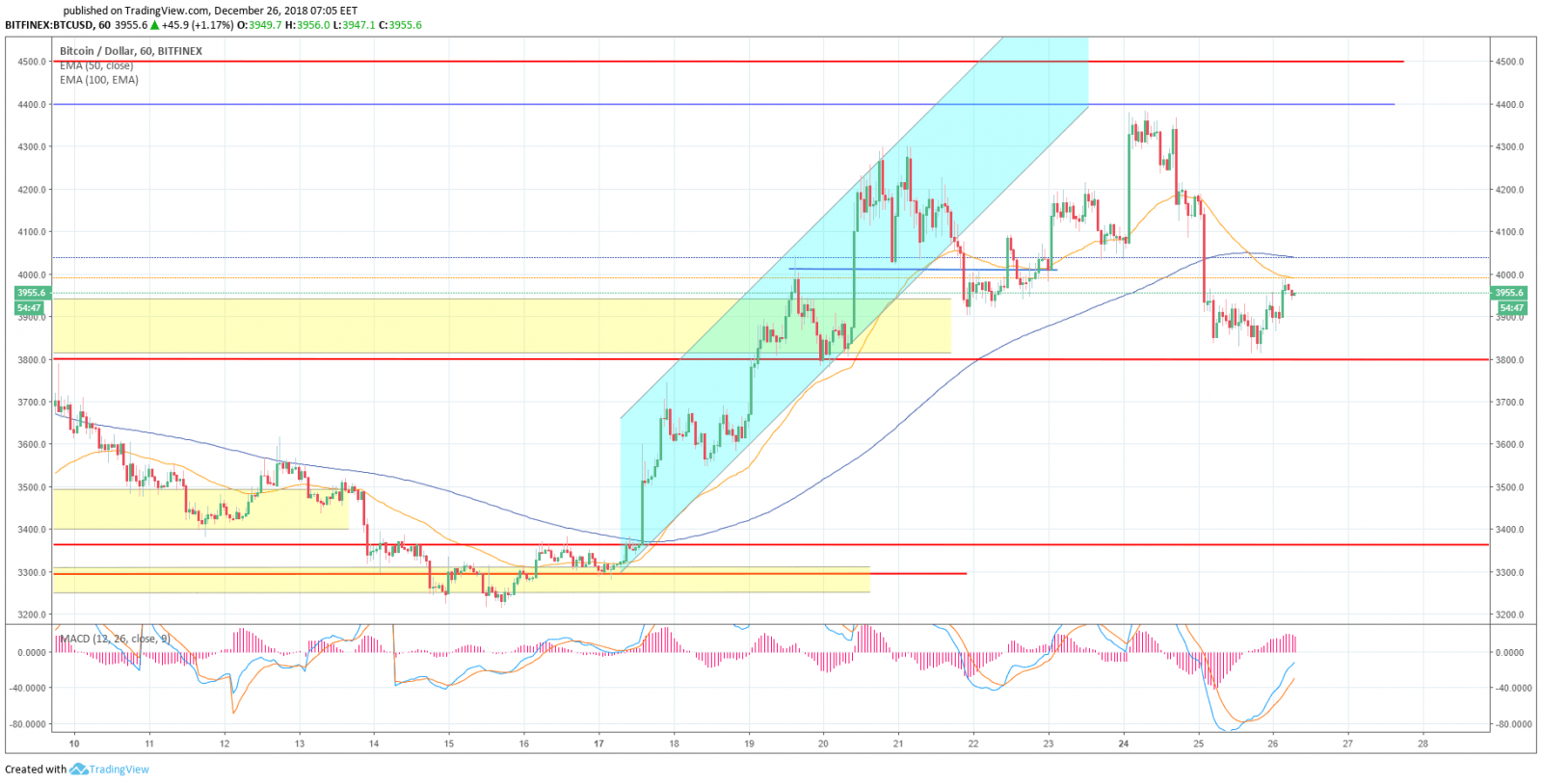 On the 4-hour timeframe, the EMA50 moving average is still higher than the EMA100, thus still signaling growth. The EMA100 at $3,822 acts as support. The MACD indicator is in the neutral zone and showing signs of an upward reversal. The $3,700$-$3,600 range is the next target in case of decline. The $4,000 level and fixation above it will give impetus to further growth.

On the day timeframe, we continue to draw the «inverse head and shoulders» pattern. Earlier it was our theory, just one of the price movement versions, but many market players have already noticed it. Let’s hope that this pattern does materialise, as in technical analysis it is a figure of reversal, that everyone has been waiting for throughout the outgoing 2018.
The moving averages are above the price. The EMA50 coincides with the $4,400 resistance level, an important one that has already been tested. Support is at $3,800.

You have to especially cautious on public holidays and we remind you about it in every review.

We wish you all good profits. Our congratulations on Catholic Christmas!