The new week started, and the fresh market review from Hitecher is here for you. The bulls did not manage to keep the initiative and trade left the ascending channel. The decline stopped at $ 6,357 (clearly...

The new week started, and the fresh market review from Hitecher is here for you. The bulls did not manage to keep the initiative and trade left the ascending channel. The decline stopped at $ 6,357 (clearly...

The new week started, and the fresh market review from Hitecher is here for you. The bulls did not manage to keep the initiative and trade left the ascending channel. The decline stopped at $ 6,357 (clearly seen on the chart), and the price quickly rose above $ 6,400. At the time of this writing, the Bitcoin price is $ 6,460. The same as with the previous decline. Many players managed to open long positions, which are located in the support area, up to the lows of the year. The MACD indicator has shifted to the buy area, both EMAs are below the price, while the EMA50 will act as local support at $ 6,440. In general, the indicators on the hourly timeframe a continuation of the upward price movement. 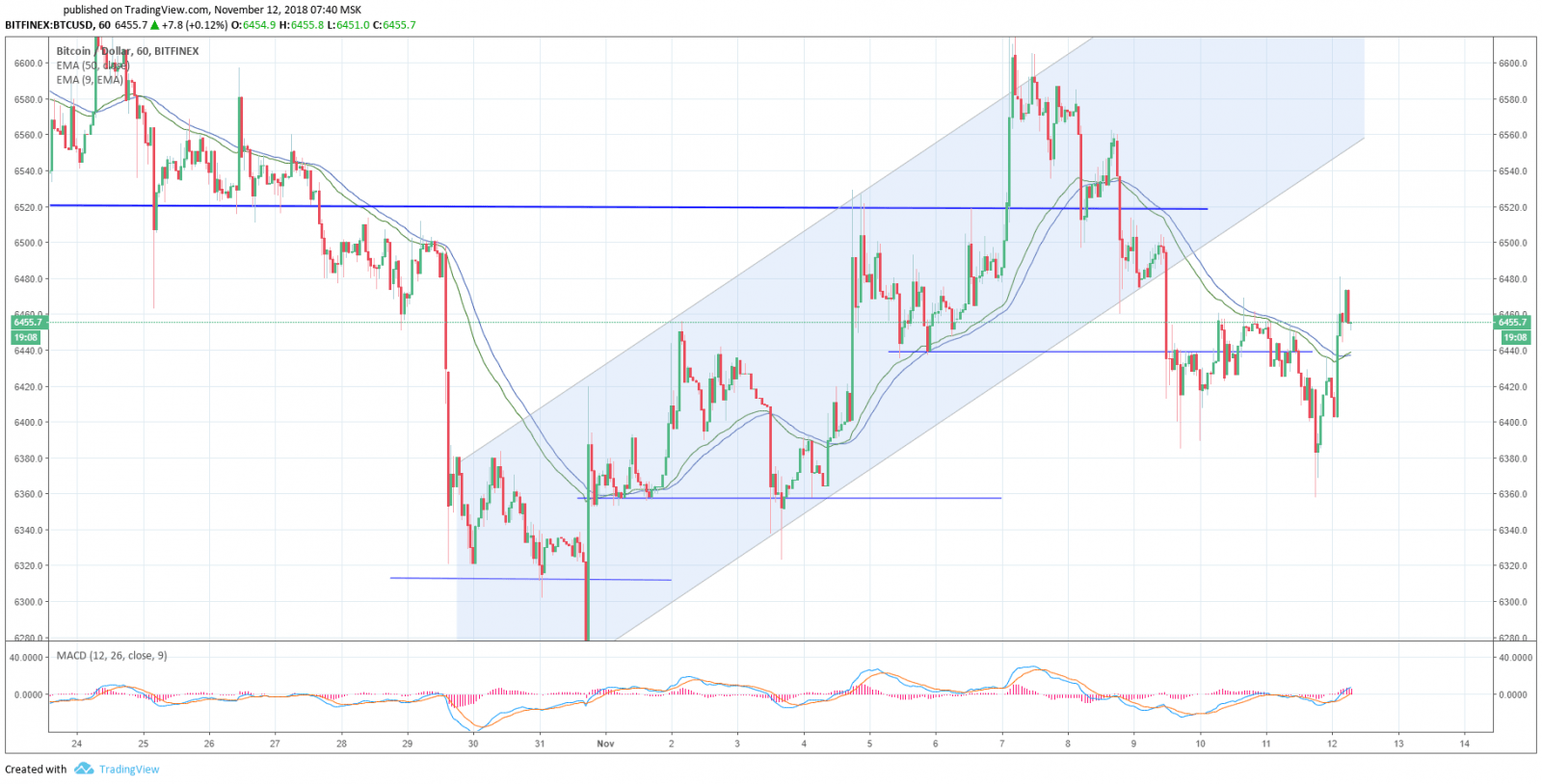 Everything here talks about the bulls strength. Both EMAs are going on at the current price level. MACD indicator has turned to the side. The levels of $ 6,520 and $ 6,600 will act as resistance in an upward movement.

The daily chart does not show priority among bulls and bears for several days in a row. Currently, moving averages EMA9 and EMA50 in a neutral position are located above the price. EMA50 at $ 6,520 will act as resistance. MACD indicator in the trade area, but shows signs of a reversal towards buy area.

Over the past week, the Bitcoin hashrate fell by 13%: from 54 quintillions to 47 quintillions. The decline began on November 4th, the lowest point since August. 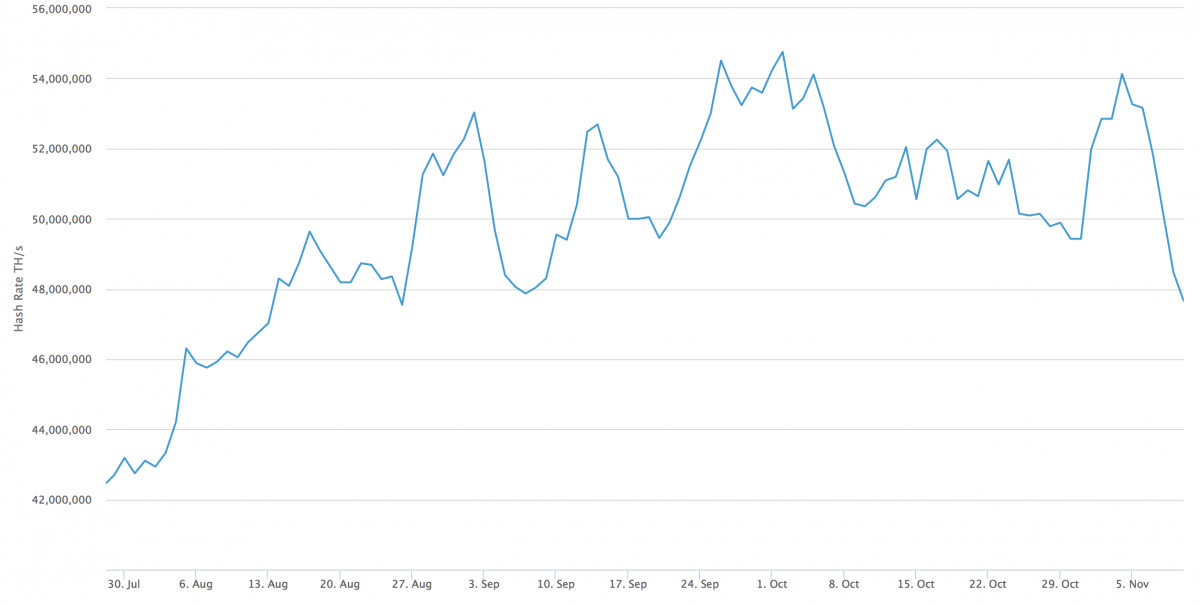 The possible reason for the decline: the BTCC pool closure, which occupied 1% of the network hashrate. Also, the reason may be simply in fact of the incoming Bitcoin Cash hardforks, which we wrote about earlier.

Important news of the week was the start of Antminer S15 and T15 sales. The devices are equipped with 7-nm chips. 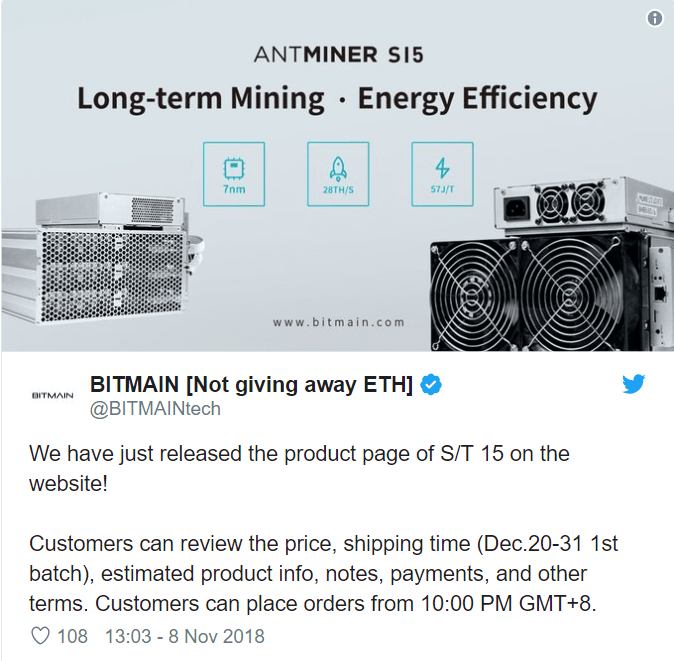 Along with the release, AMD announced launch of the eight new Bitcoin mining devices.

Will US governors lobby for the blockchain technology?

In the United States, five new governors elected in the mid-term elections on November 6, proved loyal to the crypto industry. One of the crypto-intellectuals, Jared Polis, became governor of Colorado. Moreover, one of the essential points of his program was the improvement of the digital voting system and an introduction of the blockchain to digitize government documents. The new governor of California has long advocated loyal regulation of the industry. He supports using the data from the blockchain as evidence in court.

Open long positions only with a decline to support levels, deferred ones can be put on schedule. As long as the price is in the current range between $ 6,800 - $ 6,150, a decrease to the lower limit is possible.

Our editorial board still has long positions open, and we expect continued growth in the Bitcoin price.