The human beyond: augmentations - gift or curse of the future technologies?

Our body is nearly excellent. However, no one is born perfect. No one lives forever. We are not eternal creatures, and over time get old, becoming a pale shadow of ourselves. After a short period, our youth...

Our body is nearly excellent. However, no one is born perfect. No one lives forever. We are not eternal creatures, and over time get old, becoming a pale shadow of ourselves. After a short period, our youth...

Our body is nearly excellent. However, no one is born perfect. No one lives forever. We are not eternal creatures, and over time get old, becoming a pale shadow of ourselves.

After a short period, our youth many problems with health start to reappear. Millions of people suffer from different issues which can already be taken out by the impressive technology developments. The latest rapid advancements make the craziest ideas come true and benefit the human society.

The numerous health problems, illnesses, injuries, traumas...even death — all of it can be battled with the help of the innovations of tomorrow — or maybe today?

No matter what choice you make — as the upcoming future makes the choice for us step-by-step leading the humanity to singularity.

What can we take into consideration watching the TV, going to scfi-fi blockbusters in cinemas, while reading classic fiction books? Most the existing projection of the future do have a lot in common — the omniscient AI, exosuits, smart cities and homes, robotization in all industries, space travel at warp speed, laser warfare and even teleporting. However, the basic essence of the humans body is left mostly left untouched by the hollywood movie sharks.

Of course there is an explanation, as all this is probably necessary for scenic drama — to keep the audience engaged and identifying with the initial characters. However, when it comes to real cyber topics and human implants, the flicks can differ slightly — from the movies and videogames about the characters with bionic prosthesis to the robot-like people or artificial humans.

Anyway, the human enhancements are on the way of development, while some are already a reality. The time has come to take a more defined and serious approach to the potential usage.

However, the human performance enhancement concept & trend or simply HPE does not have required attention these days as it includes a broad range of different technologies from various fields.The cases are numerous but we mostly will have a look on the most straightforward approach for now — the future prosthesis of the limbs and body.

Fact is, the typical human body may often reject implants due to the lack of histocompatibility between implants and body, and it results in many reactions including immunodefense acting and killing or trying to destroy the implants. Fact is there is much inflammation involved in the body, and the patient would die if not for the existence of immunosuppressant drugs.

There is ongoing research with developing a means for the body to stop rejections as it creates a real obstacle on the way of its practical implementation.

Russian and Swiss scientists are working hard on one such promising measures to stop rejection. Meanwhile, the physicists of Moscow State University have created a magnetic field which helps avoid implants rejection.

The one of the latest cult game series about the future, the Deus Ex, the main protagonist Adam Jensen gets literally burned on the job one day, receiving life-threatening injuries, gunshot wounds, you name it — when trying to stop the terrorist attack. The corporation he works for replaces some of his body parts with mechanical implements to keep him alive — and even better than before. The main character lives in the futuristic 2030’s world where the augmentations to enable everything: memory, social persuasion, better eyesight & physical capabilities are widespread and most common. However, the struggle with the old world only begins.

Existing physical augmentations in the form of the first-generation exoskeletons and prosthetics are improving at a slow pace aiming to become the non-medical applications — that goes not only for the limbs but of the cybernetic eyes soon. 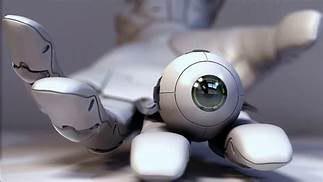 Moreover, the human augmentation such limbs are already being tested on small groups of users.

The innovative bionic limbs and robotics exoskeletons can change a lot. However, we are still very far the times when someone would like to get rid and amputate a healthy arm to replace it with a «better» cybernetic version — a common vision of many scientists and business entrepreneurs. It is worth mentioning that Will Rossellini, the CEO of a neurotechnology company who also served as an adviser for the latest Deus Ex video game, predicts that «our bodies are going to look more like cars in the future, where we are making parts that will fit into anybody’s system, where we are upgrading parts the way we upgrade a cell phone.»

What do we see today? The more acceptable alternatives are the robotic exoskeletons — one does not need to replace the standard human body parts to get extra strength, dexterity or endurance. For some years already they are used to help the paralyzed walk, run and even climb mountains! The exoskeletons are can also be used in industrial applications and, of course — in the military. The last has high regard to the future of these systems.

Numerous projects are being developed to help a soldier travel farther and carry heavier loads and weaponry. While providing much more defence from bullets and explosions than current vests and helmets. The final concept of this military application’s production is probably the Iron Man-like super armoured suit. 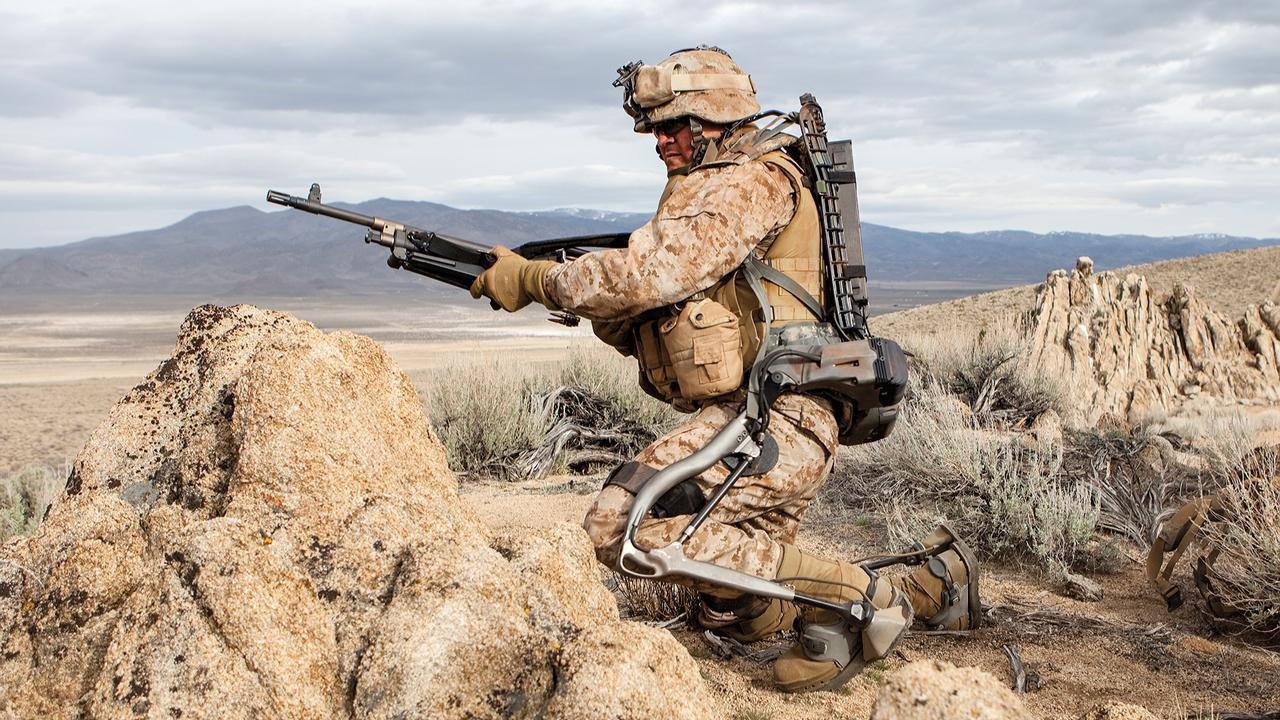 Speaking about the inner modifications — the topics are lucrative. As time goes by these are likely to progress to the point that they offer significant improvements over the standard human form, at which point they may start to be seen as an appealing option for healthy individuals.

The current augmentations for the brain are still more about the sci-fi, but the work into the brain mapping and brain-computer interfaces are on the road.

Most scientists agree that within the next few years we are going to witness the growth of many implants that provide monitoring and even communication functions — their benefits will definitely outweighing their risks.

However, one of the noted cons of augmentation in the fictional Deus Ex realm was the reliance on anti-rejection medication by augmented human — the so-called neuropozyne drug was expensive and controlled for those who are short of money to face the painful prospect of withdrawal and the eventual crippling rejection of their augments.

Fact is, the latest real-world news had not gotten far from that point a few years ago 3 Austrians had their arms removed and replaced with thought-controlled prosthetics through a new surgical procedure. However, the ground behind it was serious — all of them suffered from the severe nerve traumas, and this option was quite understandable.

However, an under-reported element of the story was the drug dependency resulting from the procedure. Moreover, The Guardian reported that surgeon Dr.Oskar Aszmann, from the Medical University of Vienna, had confirmed the three men would need to take anti-rejection medication for the rest of their lives.

In many countries where healthcare is state-run, being priced out of a much-needed treatment would be very unlikely.

The US-like countries are having a system of private healthcare the neuropozyne-like scenario is quite real. The only questions when the times comes, and we reach the stage where everyone could willingly enhance body and mind with the augmentations. If or rather, when, it comes — the danger will become a reality.

The labour market race — get augmented or starve

What other problems could face the humanity? One of the arising and complex of the nearest future is the possibility of augmented individuals to get advantages when it comes to competing for a job with other, non-augmented, candidates.

From this point — the options are limitless. The ones who aimed to get particular superiority in some fields will obtain slight advantage — that goes for the production industry, financial sector, healthcare, law, sports and so on. From here the whole picture is easy to come up with — the job market of the future, where the career options for natural individuals are reduced significantly — you won’t be able to get a decent job or build a great career without augs.

The whole of society will be split fast which will result in the wealthy groups’ domination like in the Middle Ages. The mass adoption, however, will make things even worse If augmentation became a reality for the masses — resulting in complete destruction of the ability to better one’s situation and re-creating the untouchable upper class that has begun to emerge from the ashes of global recession.

A possible alternative would, of course, be making the augmentations available through some kind of socially-funded programmes. The problem is, this idea would likely be met with harsh resistance in more traditional world cultures and reactional groups.

Moreover, If these improvements made only for rich people as the way to exceed nature and go beyond human capabilities, adverse reactions are sure to arise.

Likely that many different religious groups would see the advanced technology use as playing god as humans were never meant to interfere with a machine.Whether religion serves as a barrier to augmentations, in reality, remains to be seen, and it is likely that some religions will have success in some areas of the world.

However, in many areas religion opposition is unlikely to be more than a minority, and if society seems augmentations as a benefit, they will stand a good chance of being accepted.

The aesthetics of augmentation

The latest news suggests that the worldwide adoption of the physical look of the augmented people can be achieved.

In late September 2018, Chiara Bordi became a «Miss Italy 2018» contest finalist, taking the third place. Moreover, she did it even though one of her legs — is bionic.

No doubt that Chiara stole many hearts of the men worldwide because of her natural charm. He numerous critics say that Bordi was able to get this place only because of political correctness-allegedly missing leg was a pass to the competition. However, looking at her, you will understand that she is really worthy to get the title of «Miss Italy».

Chiara Bordi is 18 years old, and she lives in the small town of Tarquinia in Central Italy. She lost a leg in 13 years, as a result of the accident was riding a bike and was struck by a car. Since then, Chiara has learned to use bionic prostheses, was able to break into the modelling business and, apparently, to overcome the complexes. His critics, who say that she was taken to «Miss Italy» only for the fact that she has no legs, Bordi says: «but You have no brains.» 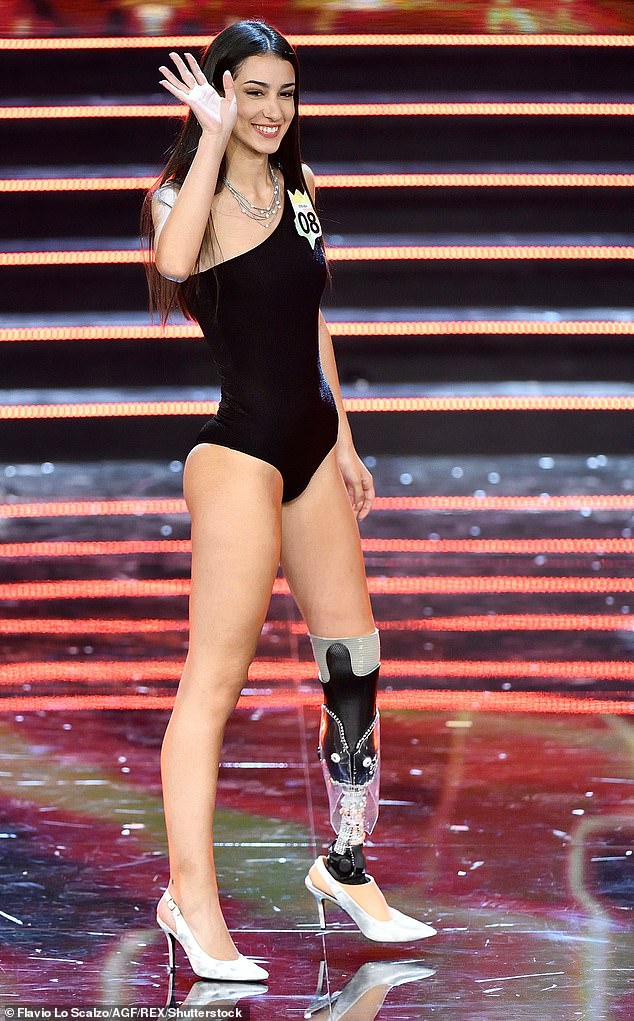